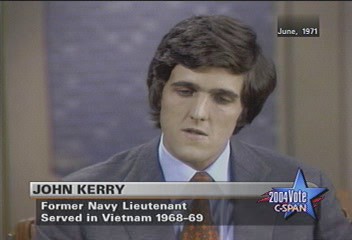 The invaluable LGF points us to this fascinating interview with John O'Neill in the most recent issue of The American Enterprise. O'Neill, of course, is one of the SwiftBoat Veterans who had an enormous impact on the recent Presidential Election. And, according to O'Neill, they tried to convince the Democratic Party to nominate someone, anyone, other than John Kerry. The Swiftvets, far from being partisan, simply despised the idea of Kerry as President.

Coincidentally, today marks the forty-fifth day since John Kerry promised -- on national television -- to sign his Form-180, which would release his military service records. He has yet to do so. Anyone still undecided as to the truth behind his military service need only contemplate that Kerry, despite his promises, continues to stonewall on his service records. That should tell you all you need to know.

at 6:53 AM
Email ThisBlogThis!Share to TwitterShare to FacebookShare to Pinterest