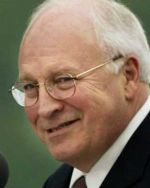 The Weekly Standard's Steve Hayes published a lengthy article this week describing his journeys with Dick Cheney (hat tip: PowerLine) during recent tours of Iraq, Afhanistan, and Pakistan. It includes Cheney's vehement denunciation of the Mediacrats -- without naming names -- and their inherent inability to take this war seriously:

All the more reason that the mediacrats must be kept from the levers of governmental power. They have seen the classified intelligence left unrevealed to the general public. They have seen the reports that represent "a hell of a threat." Yet they continue their partisan backbiting and chicanery, risking everything this country holds dear in a series of constipated attempts to regain political power.

Their unseriousness about the war is represented by Jay Rockefeller, who would rather secrete a note in a safe rather than confront the Attorney General regarding NSA international wiretaps. Or Harry Reid, who gloats that the Democrats have "killed" the Patriot Act. Or Howard Dean, who actively roots against victory in Iraq.

If the Democrats were constructive in their opposition - offering plans and methods for success (on Medicare, Social Security, the War on Terror, anything!) rather than obstructionism, they'd have a heck of a lot better shot in 2006. Today, however, they're the party that stands for one thing: hatred of Bush. And that's not enough to win elections.
at 6:06 AM
Email ThisBlogThis!Share to TwitterShare to FacebookShare to Pinterest