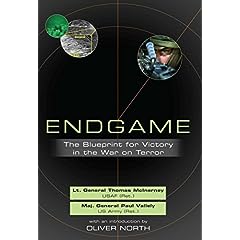 Thomas McInerney, co-author of an excellent book on terrorism ("Endgame"), ruminates on a possible strike against Iran's despotic regime. Why would such a preemptive attack be necessary?

Iran's "President" Ahmadinejad has already promised to destroy the U.K., U.S., and Israel. Apparently, sanctions aren't sufficient for the Mullahs... he simply wants to wipe these countries off the face of the Earth.

Ahmadinejad is also a certifiable nutcase with messianic delusions. He frequently mentions the Twelfth Imam (Mahdi) in his speeches. That figure vanished in the year 941 and his return will herald "the end of days". Ahmadinejad even mentioned the Mahdi in his September speech at the UN. And he frequently discusses realignment of Iran's government to prepare for (yes, you guessed it) judgment day.

Amir Taheri, writing in the Telegraph, puts it this way:


So let's do the arithmetic: take a fascist dictator with delusions of messianic grandeur, add in a burgeoning nuclear weapons capability, fling in plenty of apologists in the West, and then toss in a heaping dollop of hatred for all infidels (Buddhists, Christians, Hindus, and Jews). The result? A recipe only Adolf Hitler could love.

So... what would an attack on Iran look like?

Weekly Standard: Target: Iran
at 11:19 AM
Email ThisBlogThis!Share to TwitterShare to FacebookShare to Pinterest