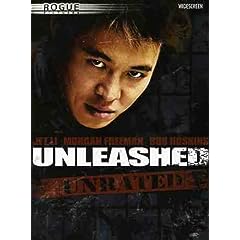 Trained from childhood to become a killing machine for a mobster (Bob Hoskins), Danny (Jet Li) is literally a caged animal. When bills need to be collected upon, the gang brings Danny along. If payment isn't made, they release him from his steel leash and Danny becomes a barbaric war machine of unspeakable fury, using lightning-quick hands, feet, elbows, headbutts, and any other appendage in staccato blasts. The gang always gets paid.

But when his boss crosses the wrong crew one day, Danny suddenly finds himself wounded badly, bewildered and homeless. With no social skills whatsoever, he staggers back to the scene of one of his recent battles, where a piano and a blind piano-tuner (Morgan Freeman) had briefly captured his attention. Bleeding profusely, Danny collapses at Sam's feet.

Recognizing that Danny has special needs, Sam and his adopted daughter nurse the youth back to health and begin to integrate him into polite society. Danny becomes a set of eyes for Sam, helping with chores like shopping and escorting Victoria back and forth to school. Over a period of weeks, Danny becomes an adoptive member of the family. It is on a typical daily shopping sojourn that one of the old gang spots Danny. It turns out that Bart, the boss, has survived to live another day. And he wants his old enforcer back in the fold. This is where things get really ugly.

Li, Hoskins and Freeman all do fine work here. Hoskins obviously has the part of Glasgow mobster mastered and you probably couldn't find a more convincing actor to play the role. Freeman is, well, Freeman. He's convincing without being overwhelming and is the warm, stable center of the film. And Li is not only a gifted fighter, he's also convincing as a human being raised in unspeakable living conditions. All told, the film is far more than a cookie-cutter action flick. It's enjoyable, escapist fun with some pretty fine acting to help drive the story.
at 8:22 AM
Email ThisBlogThis!Share to TwitterShare to FacebookShare to Pinterest