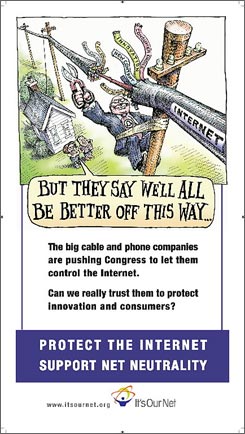 Let the folks over at USA Today summarize Ted Stevens' proposed telecom legislation. The Senate bill does not provide strong protections for net neutrality. In addition, the bill would:


How could such a thing happen? Well, consider Ted Stevens (R-Alaska) -- recipient of major telco funding ($71,250 in this year's cycle, according to MoveOn.org) and -- coincidentally (wink, wink, nudge, nudge) -- major backer of this legislation. Let's listen in on Stevens as he elaborates on his rationale for backing the telcos in this fight:


This clown idiot dunce esteemed politician knows as much about the Internet as one of the crustaceans swimming around at Red Lobster. Only he has a little less charismatic of a personality.

Letting rockets scientists like Stevens guide the future of the Internet is like having Britney Spears and K-Fed babysit your newborn child. There'll be lots of smoke and crying following all of the bad decisions.

I sent an Internet to him to complain. You can go to Save The Internet and make a series of calls to the Senators in question. Make your voice heard over the ringing of the lobbyists' cash registers in the Senate.
at 6:03 AM
Email ThisBlogThis!Share to TwitterShare to FacebookShare to Pinterest
Labels: FCC

Can anyone recommend the best Network Management tool for a small IT service company like mine? Does anyone use Kaseya.com or GFI.com? How do they compare to these guys I found recently: N-able N-central it management
? What is your best take in cost vs performance among those three? I need a good advice please... Thanks in advance!