• Liar: Nancy Pelosi says she was never warned about the financial crisis. I guess she was in the Trinity United Church restroom with Senator Obama during the roughly two dozen efforts by the Bush administration since 2001 to reform Fannie and Freddie. These were blocked repeatedly by Democrats because the GOP did not have a filibuster-proof majority.

• Childish and pathetic: "I've got a bracelet too." ...Jim, let me just make a point. I’ve got a bracelet, too, from Sergeant - from the mother of [can’t think of the name, looks down to read name on bracelet] Sergeant Ryan David Jopeck, sure another mother is not going through what I’m going through...

In reality the Jopek family is none-too-pleased with Obama and does not want the senator wearing their son's bracelet. I'll alert the mainstream media, who I'm sure will report this dichotomy instantly.

• Liar, Part Deux: Henry Kissinger says Obama was fibbing during the debate when he mentioned the old diplomat. Interviewed by Megyn Kelly, Kissinger said Obama is full of s***. Or words to that effect.

• Obama's Brownshirts are at it again: Notwithstanding their efforts to silence Dr. Stanley Kurtz of the National Review (while avoiding debate on his research), Obama's thugs are at it again. 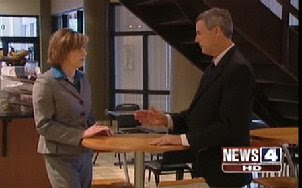 KMOV TV (St. Louis) reports that two prominent government officials have formed a "truth squad" at the behest of the Obama campaign. Obama is asking Missouri law enforcement "to target anyone who lies or runs a misleading TV ad during the presidential campaign." I am not making this up. Governor Matt Blunt of Missouri announced the following on Saturday:

St. Louis County Circuit Attorney Bob McCulloch, St. Louis City Circuit Attorney Jennifer Joyce, Jefferson County Sheriff Glenn Boyer, and Obama and the leader of his Missouri campaign Senator Claire McCaskill have attached the stench of police state tactics to the Obama-Biden campaign... What Senator Obama and his helpers are doing is scandalous beyond words... abusing the justice system and offices of public trust to silence political criticism with threats of prosecution and criminal punishment... Barack Obama needs to grow up."

Professor Mitchell Langbert suggests an effective response for bloggers of both political persuasions disgusted by these Gestapo-style tactics. More to come.

• The rotten ACORN: The American Thinker's James Simpson lays out a compelling description of the "manufactured crisis."

Before the 1994 Republican takeover, Democrats had sixty years of virtually unbroken power in Congress - with substantial majorities most of the time. Can a group of smart people, studying issue after issue for years on end, with virtually unlimited resources at their command, not come up with a single policy that works? ...One of two things must be true. Either the Democrats are unfathomable idiots, who ignorantly pursue ever more destructive policies despite decades of contrary evidence, or they understand the consequences of their actions and relentlessly carry on anyway because they somehow benefit... I submit to you they understand the consequences. For many it is simply a practical matter of eliciting votes from a targeted constituency at taxpayer expense; we lose a little, they gain a lot, and the politician keeps his job. But for others, the goal is more malevolent - the failure is deliberate. 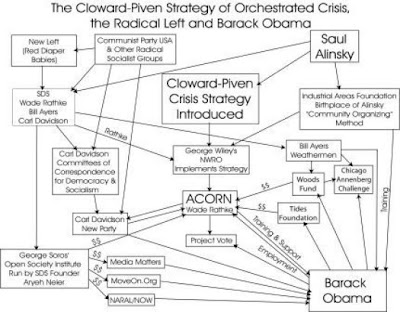 ...The chart puts Barack Obama at the epicenter of an incestuous stew of American radical leftism. Not only are his connections significant, they practically define who he is. Taken together, they constitute a who's who of the American radical left... Conspicuous in their absence are any connections at all with any other group, moderate, or even mildly leftist. They are all radicals, firmly bedded in the anti-American, communist, socialist, radical leftist mesh...

It's important. Read the whole thing. Investors Business Daily has more on the malevolent bands of miscreants who call Obama an ally.

Update: New blog: I've got a bracelet too!.
at 10:20 AM
Email ThisBlogThis!Share to TwitterShare to FacebookShare to Pinterest
Labels: Crime, Democrats, Obama