Un-frickin-believable: U.S. Military Serving as Chauffeurs, Babysitters for the Pelosi Kids: Receipts That Will Blow Your Mind

Update: Judicial Watch provided separate documents from an earlier FOIA request which show that "most, if not all" of the flights did indeed have the Speaker aboard. This is being researched and, until complete, corrections are noted below.

Update II: Commenters provide links to DOD 4515.12-R "DoD Support for Travel of Members and Employees of Congress and DOD 4515.13-R "Air Transportation Eligibility", both of which seem to indicate any travel by the Speaker's adult -- non-dependent -- children and grandchildren is off-limits.

Earlier: This post is updated here and it would appear that military jets may have been improperly utilized by House Speaker Nancy Pelosi to shuttle her children and grandchildren around the country.

What hasn't been revealed thus far is that military aircraft are being used to shuttle Pelosi's kids and grandkids between DC and San Francisco time and time again, which appears to be a violation of the appropriate rules (see above). Put simply, the United States Air Force is serving as a multi-billion dollar chauffeur- and baby-sitting service for Nancy Pelosi's kids and grandkids -- presumably because commercial travel is beneath the families of the autocrats.

But this couldn't be a waste of resources because the U.S. military really isn't engaged in any other significant activities around the world. 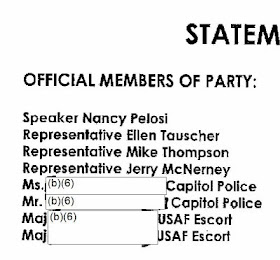 Even if you assume that the Speaker's use of military jets for her personal travel is legitimate (a big "if" -- and here's an example of such a use), it would appear the Speaker is shipping her kids and grandkids across the country -- without any real Congressional delegation on board -- by using the military as a family shuttle service! 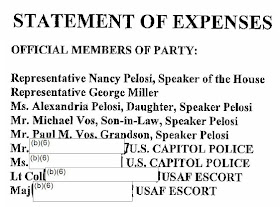 Here's an example of the kids traveling with the Speaker. 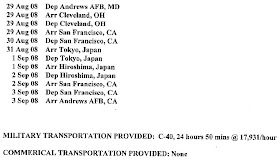 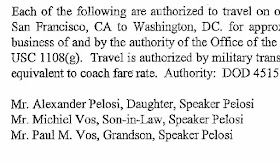 Here's but one example of the Speaker's kids traveling by military aircraft! 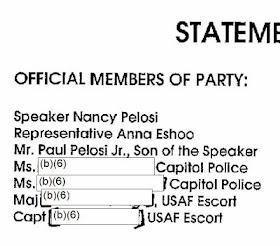 In this case, Nancy's son hitches a ride.

But here's another example of the Pelosi kids traveling in style and reimbursing the Air Force at Coach rates.

Other kids -- again -- stylin' courtesy of the taxpayer.

In this case, the Speaker's son travels on a military jet.

Here are the kids jetting back and forth again.

Hubby and kids are transported -- reimbursing the Air Force at maybe $400 a seat. 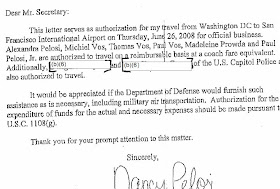 Pelosi's kids travel once more with the Queen.

In this instance, Pelosi's relatives hitch a ride on a Congressional flight.

The kids and grandkids tag along.

Favored sycophant Anna Eschoo (D-Socialist California) is in good graces -- she gets her own military jet. 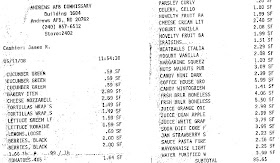 In-flight food is never a problem... hundreds of pages of receipts for food and beverages were included in the FOIA documents.

Another House Democrat gets her own flight, presumably because she slavishly votes the Pelosi line.

Wine and beer, anyone?

In this case, domestic flights are operating at the discounted price of around $35,000 per -- the Pelosi kids are kind enough, presumably, to reimburse the Air Force at around $400 a head. 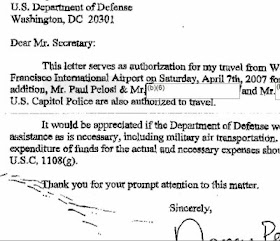 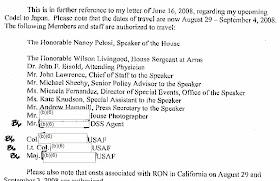 Oops. They lost their receipt! 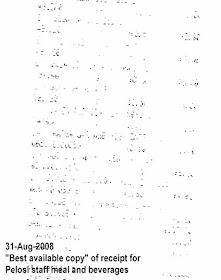 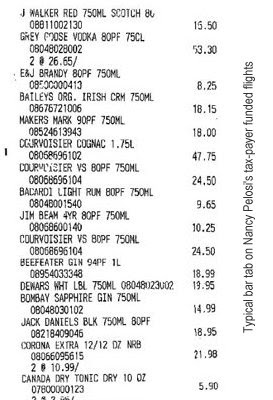 You stupid little taxpayers: pick up the bar tab, dammit!

With the economy in a shambles and teetering on the brink of disaster thanks to the insane policies of the Democrats, this kind of waste is an outrage.

Pelosi needs to resign as Speaker.