The more I read about Governor Chris Christie, the more I like him. In what should be a model for the federal government, Christie is trying to de-fund New Jersey's "shadow government." By that I mean the unelected hack regulatory bodies that do nothing but impede commerce and torment the citizenry.

They run airports and regulate charity bingo. They borrow money to build schools and try to ban bikini waxes. 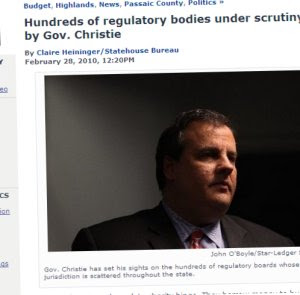 They provide "soft landings" — complete with fat salaries and pensions — to allies of the politically powerful. And they spend billions of public dollars every year.

Now New Jersey’s 700 boards, authorities and commissions are being dragged from obscurity into the crosshairs of Gov. Chris Christie, who has slashed their spending and ordered a broad review that could put some out of existence.

It’s a mission as wide-ranging and complicated as the entities themselves, many of them unique kingdoms with their own budgets, structures and standards.

"I’ve been involved in local politics since the mid-1970s, and I don’t have an answer to why some authorities work efficiently and why some are just dumping grounds for political hacks," said Jim Freeman, a longtime member of the Plainfield Area Regional Sewerage Authority. "I wish I did know. I would have the answer to the biggest problem in New Jersey."

Christie is not the first governor to try to rein in the state’s "shadow government," and some reforms have been made after abuses were documented by watchdogs. But Christie broke new ground last week with an executive order limiting state authorities’ ability to hire lobbyists, offer employee severance packages and pay for travel and entertainment greater than $250.

There are roughly 750 authority employees who earn over $100K a year, topped off by the $313,000 salary of the soon-to-be-retired Pessaic Valley Sewage Commissioner.

Christie's model, in my uninformed opinion, is perfect for the federal government too.

How much damage could the Department of Labor and the EPA do if their total funding was restricted to, say, $50 million? I say we cap-and-trade their damn budgets.

I know what your are going to say "But he was never in the state legislature."

Couldn't agree more. When he's done with New Jersey I want to see the Fed's undergo this type of fiscal rectal exam.

Calling it a "Shadow Government" is too kind. "Rats' Nest" is a more apt descriptor.