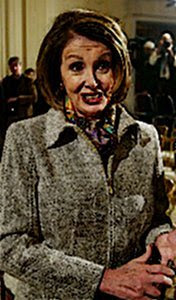 (Washington DC - RNN) Democrat insiders say that an obscure parliamentary procedure known as "Staple-and-Bind" will be used as an alternative to pass a health care overhaul should reconciliation efforts fail. "Staple-and-bind" refers to the final act of preparing legislation, using an industrial-grade stapler and a three-ring binder, for shipment.

"We take a trivial piece of legislation -- a resolution to honor Vin Diesel for his lifetime acting achievements, for instance," said House Speaker Nancy Pelosi.

"At the very last second, the instant before we staple and bind the legislation, we can insert as many pages of new law as will fit in the binder," she said, "This will allow us to pass a meaningful, bipartisan health care reform bill that will benefit all Americans with just nine votes in the House and three votes in the Senate."

Politico's Mike Allen reported late this afternoon that Senate staffers were scouring the District for the largest American-made three-ring binder, the Avery Royale Deluxe. It is widely believed that the Royale is the only binder large enough to contain the entire 2,770-page health care reform bill.

Congressional Democrats have also purchased a Staple Jihad 5000 Nail Gun, the only street-legal stapler capable of binding the massive legislation. The propane-powered stapler can penetrate up to 3,000 8.5" x 11" pages, which leaves room for Democrats to nationalize other aspects of medical delivery including dentistry, veterinary medicine and crystal healing stones.

"Staple and Bind" is what Pelosi's plastic surgeon called her last procedure.

Yeah, but it's too close to the truth to call it satire--and now you've gone and given Pelosi an idea for something else to try.