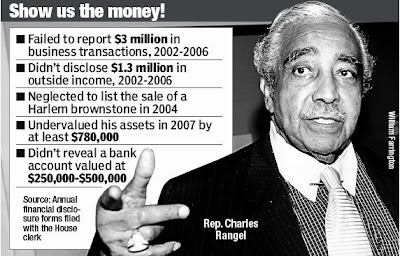 The laundry list of ethical violations reportedly committed by Rep. Charlie Rangel (D-NY) requires a database to keep straight. The man is a career politician who somehow amassed a huge fortune while in office. Not only that, he 'forgot' to report all of his income to the IRS. No matter. He's royalty and we're peons. He's like Steven Seagal -- above the law.

But that laundry list of skulduggery matters not to Bloomberg (the idiot Mayor, not the news service). With no other pressing matters of city management weighing him down -- other than regulating salt consumption in the city -- Bloomberg has taken the time to vocally back Rangel, ethics be damned.

Mayor Michael R. Bloomberg is giving beleaguered Representative Charles B. Rangel a boost with a recorded phone message urging voters to support him. “Tough times require tough leadership, and that is what Charlie Rangel has provided for us, and will continue to provide for us going forward,” Mr. Bloomberg says in the robocall expected to flood Mr. Rangel’s district on Sunday.

In related news, a SWAT team raided Delmonico's early this afternoon and arrested the maître d'.