Warning: Do Not Taunt Your Compact Fluorescent Lamp 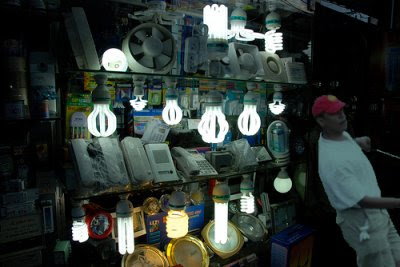 MSNBC reports that consumers are hoarding incandescent light bulbs before they are banned next year by our beloved, all-powerful, authoritarian central government.

Several years ago, the EPA mandated that "environmentally friendly" light bulbs -- namely, Compact Fluorescent Lamps (or CFLs) -- replace incandescents, which were cheap and easy to dispose of.

Just in time for the ban, China has decided to close and nationalize its rare earth metal producers. The resulting shortage of key CFL components spiking the price of the new bulbs here in the U.S.

Presidential hopeful Michele Bachmann has been among the most vocal opponents of the phase-out, arguing that "the government has no business telling an individual what kind of lightbulb to buy."

The reported price hikes won't quell protests. The average price for a CFL is up 37 percent this year, the Times reports, attributing the figure to the National Electrical Manufacturer's Association (NEMA)... The higher prices are prompting sticker shock at places like Walmart, where the bulbs are sold.

Several years ago, Thomas Lifson at The American Thinker reported his own issues with CFLs. They are designed to replace normal incandescent lamps but require less energy: roughly $30 worth over the lamp's lifetime.

What precautions should I take when using CFLs in my home?
CFLs are made of glass and can break if dropped or roughly handled ..

How should I clean up a broken fluorescent bulb?
EPA recommends the following clean-up and disposal guidelines:

1. Open a window and leave the room (restrict access) for at least 15 minutes.
2. Remove all materials you can without using a vacuum cleaner.
* Wear disposable rubber gloves, if available (do not use your bare hands).
* Carefully scoop up the fragments and powder with stiff paper or cardboard.
* Wipe the area clean with a damp paper towel or disposable wet wipe.
* Sticky tape (such as duct tape) can be used to pick up small pieces and powder.
3. Place all cleanup materials in a plastic bag and seal it.
* If your state permits you to put used or broken CFLs in the garbage, seal the CFL in two plastic bags and put into the outside trash (if no other disposal or recycling options are available).
* Wash your hands after disposing of the bag.
4. The first time you vacuum the area where the bulb was broken, remove the vacuum bag once done cleaning the area (or empty and wipe the canister) and put the bag and/or vacuum debris, as well as the cleaning materials, in two sealed plastic bags in the outdoor trash or protected outdoor location for normal disposal.

Roughly translated, cleanup after a CFL bulb breaks is: (a) evacuate the house for a while, and then (b) clean up while wearing a traditional hazmat suit. Yes, it's... just... that... simple.

It reminds me of the old Saturday Night Live ad for the curious kids' toy called Super Happy Fun Ball:

Happy Fun Ball contains a liquid core, which if exposed due to rupture should not be touched, inhaled, or looked at. If Happy Fun Ball begins to smoke, get away immediately. Seek shelter and cover head. Happy Fun Ball may stick to certain types of skin. When not in use, Happy Fun Ball should be returned to its special container and kept under refrigeration.

Failure to do so relieves the makers of Happy Fun Ball, Wacky Products Incorporated, and its parent company, Global Chemical Unlimited, of any and all liability...

Do not taunt Happy Fun Ball.

Remember: Do not taunt your Compact Fluorescent Lamp.

For all the environmental good these bulbs may be, if you break just one you'll be harming the environment (between the plastic bags and rubber gloves, as well as the extra vacuum bag) 10-fold.

Only our government can come up with such a stupid plan.

Some people with skin or other conditions get worse under cfl light. and don't forget the sanitation collectors who are at risk for all the cfl bulbs people just stash in the trash...fortunately, LED light bulbs are getting better by the minute. They are non-toxic and long-lived (well, some of them are). BUt let's hope the incandescent ban will be lifted as soon as we get someone else in the white house....

As this article states, CFLs do contain a small amount of mercury and consumers should be careful when handling and disposing of them. However, CFLs are a better solution, both economically and environmentally, than incandescent bulbs, which ultimately result in greater mercury exposure than CFLs, because they consume more power and require more power generation. Since mercury is a byproduct of burning coal, coal-fired power plants are a larger source of mercury pollution than the mercury content in the CFLs. Although CFLs do contain a small amount of mercury, with a proven packaging configuration and proper disposal, CFLs can be used effectively without releasing harmful mercury vapor.

While a variety of containers are marketed for transportation of fluorescent lamps and CFLs, many don't provide sufficient protection against mercury vapor emitted from broken lamps. Using a proven packaging design is vital to ensuring the safety of people who handle these lamps, as well as maintaining their green benefits. Read about a recent study that tested several packaging configurations here: http://vaporlok.blogspot.com/2010/05/layers-of-protection-packaging-used.html If a bulb breaks, consumers can learn more about clean-up procedures here: http://www.epa.gov/cfl/cflcleanup-detailed.html

For the love of God, people. Use some common sense! CFL's are said to outlast regular incandescent bulbs several times over. But that is not the average. CFL's last about as long as a standard incanescent bulb but cost significantly more. As far a mercury is concerned, I don't see government trying to stop the usage of the long fluorescent tubes found in office buildings which contain more mercury than home CFL's. The "regulations" are not only ridiculous but costly to the home user as well. Don't be duped into believing your saving the planet at the expense of your own life. We are supposed to subdue the earth, not die for it.