Unless you were watching 60 Minutes this Sunday, it's likely you missed its interview confirming that Bill Clinton had Osama Bin Laden in his sights and refused to pull the metaphorical trigger. Ultimately, the 9/11 attacks -- only one of a series of devastating and deadly terror strikes tied to Bin Laden -- became the end-result. 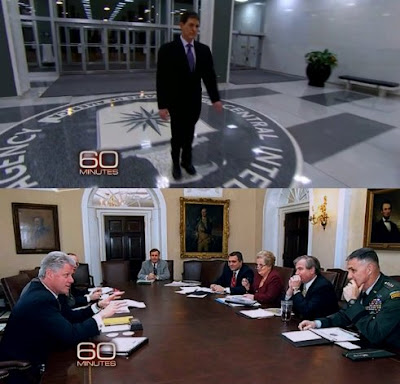 Hank Crumpton, Former Deputy Director of the CIA'S Counter-Terrorism Center: From '98, '99 all the way up to 2001, the warnings were there ... We had extensive human networks in Afghanistan, Afghan sources that had been reporting on al Qaeda, on the presence of bin Laden.

But Crumpton says the Clinton White House didn't trust the CIA's Afghan sources alone and they wanted U.S. eyes on the target.

Hank Crumpton: So we were driven to look at various technical options. And we looked at a range of things. Long-range optics, they were too heavy, too cumbersome to get over the mountains. We looked at balloons. The prevailing winds would take those balloons to China. That would be a bad thing. We scrapped that. And then we stumbled across the UAVs, particularly the Predator. And sure enough, wasn't long before we had the Predator in theater over Afghanistan, the Predator unarmed at the time. And our human sources took us to a village-- far-- not far from Kandahar.

Lara Logan: And what did you see there?

Hank Crumpton: We saw a security detail, a convoy and we saw bin Laden exit the vehicle.

Hank Crumpton: Clearly. And we had-- the optics were spot on. It was beaming back to us, CIA headquarters. We immediately alerted the White House. And the Clinton administration's response was, "Well, it will take several hours for the TLAMs, the cruise missiles launched from submarines, to reach that objective. So you need to tell us where bin Laden will be five or six hours from now." The frustration was enormous.

Lara Logan: So at that moment you wanted to kill him?

Lara Logan: But you couldn't get permission?

He couldn't get permission to do anything, including allowing the CIA's Afghan agents on the ground to attack bin Laden's compound. That missed opportunity in the late summer of 1999, led Crumpton and his CIA team to figure out how to arm the Predator drone with hellfire missiles.

Lara Logan: So the Predator drone strikes that take place in the tribal areas of Pakistan today are a direct result of what happened when you had Osama bin Laden in your sights in Afghanistan and no way to kill him yourselves?

Hank Crumpton: It was a response to the lack of response on the part of the administration or DOD. So the handful of CIA officers that we had, in great frustration, we began the discussion of, "Okay. We find him again we will have to engage ourselves. And we'll have to do it right then, right there."

What a freaking outrage. And equally outrageous? Legacy media's silence.

As Richard Miniter wrote in 2007, Berger's intent was to prevent disclosure of the Clinton cowardice that ultimately led to 9/11. Even now that CBS has confirmed the story, a quick Google News search reveals that no one in old media cares.

3,000 innocent Americans dead. Countless thousands of American warriors fallen and wounded in avenging the terrorist attacks and those who enabled them.

A president who knew Bin Laden was complicit in prior attacks and failed to act.

A cowardly president who was too busy golfing to do his job.

In other words, just another disastrous Democrat president.

Well, he may have screwed up on killing Bin Laden, but Slick Willie was able to take out Vince Foster.

If you believe Angelo Codevilla (and I do) Clinton had no reason to take out OBL in 1998:

Consider: We know that Khalid Sheikh Mohammed (KSM) planned and carried out 9/11. But there is no independent support for KSM's claim that he acted at Osama's direction and under his supervision. On the contrary, we know for sure that the expertise and the financing for 9/11 came from KSM's own group (the U.S. government has accepted but to my knowledge not verified that the group's core is a biological family of Baluchs). This group carried out the 1998 bombings of U.S. embassies in Africa and every other act for which al Qaeda became known. The KSM group included the perpetrators of the 1993 World Trade Center bombings Abdul Rahman Yasin, who came from, returned to, and vanished in Iraq, as well as Ramzi Yousef, the mastermind of that bombing, who came to the U.S. from Iraq on an Iraqi passport and was known to his New York collaborators as "Rashid the Iraqi." This group had planned the bombing of U.S. airliners over the Pacific in 1995. The core members are non-Arabs. They had no history of religiosity (and the religiosity they now display is unconvincing). They were not creatures of Osama.