History: Few comparisons have been as odious as the one offered by the president linking one of the great mass murderers of history to one of America's Founding Fathers and authors of our liberty. 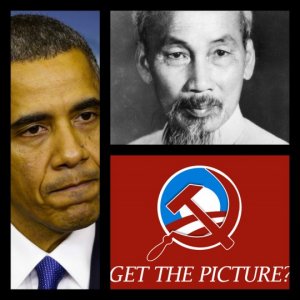 Nazi Germany and Imperial Japan were mortal and inhumane enemies who joined civilization after their hideous barbarism was defeated.

They renounced their former brutality, acknowledged their guilt and shame, and became our strongest allies as they genuinely embraced liberty and democracy. They did not forget their past. They repudiated it.

Vietnam has never repudiated its past while celebrating a faux victory over an American enemy that was never defeated on the battlefield but only in the halls of a Congress that abandoned an ally and snatched defeat from the jaws of victory.

President Obama met with his Vietnamese counterpart, President Truong Tan Sang, last Thursday in the same Oval office where LBJ picked bombing targets in a war he micromanaged into futility. The 44th president conveniently forgot Vietnamese history and slandered ours by linking a founder of our democracy, Thomas Jefferson, to the mass murderer Ho Chi Minh.

Sang had brought Obama a copy of a letter sent to President Truman from Ho in which the communist dictator spoke hopefully of cooperation with America.

Obama, stopping short of yet another apology, mused about what might have been, and noted "we discussed the fact that Ho Chi Minh was actually inspired by the U.S. Declaration of Independence and Constitution, and the words of Thomas Jefferson."

That's technically true and historically accurate. Ho Chi Minh did frame the earliest portions of the 1945 Vietnam Declaration of Independence on the actual Declaration of Independence written by Jefferson in 1776. But while the future third president spoke of inalienable rights granted by his and our Creator, he meant it. Ho Chi Minh was only serious about the glory of the state.

Come to think of it, Obama is too, often leaving the word "Creator" out of any mention of our inalienable rights as mentioned in the declaration while he routinely ignores the Constitution and its restriction on his and federal powers.
To be charitable, one could claim Obama was just trying to humor a guest, as Trent Lott once did to Strom Thurmond.

But was it necessary to praise a man who killed approximately half a million people in an effort to consolidate his power, or to suggest ideological similarities between the architect of mass carnage and an author of liberty?

In consolidating his dictatorial power in North Vietnam, Ho went after landowners, intellectuals, school teachers, businessmen, civic leaders, anyone who might pose future opposition to his thuggish rule. Those who would not publicly confess their crimes against the state and the people were often brutally executed.

By early November 1956, when residents of An Giang province, which included Ho's birthplace village of Nam Dan, refused to pay what they considered oppressive taxes, Ho sent troops to collect, then sent in an army division, shooting. About 6,000 unarmed villagers were killed in a massacre obscured by the Soviet Union's suppression of Hungary.

After Ho's death in 1969, his successors did not miss a beat. Congressional Democrats and their allies in the media, such as the venerable Walter Cronkite, who had already proclaimed the war lost, helped ensure South Vietnam's defeat and ushered in an era of mass carnage, boat people and re-education camps that resulted in more death after the war than during it.

After Saigon's "liberation," the summary executions of tens of thousands of South Vietnamese began. Hundreds of thousands more were forced into re-education camps as 1 million boat people fled on anything that would float, with countless thousands perishing in the South China Sea. And let us not forget the killing fields of Cambodia, where 3 million were slaughtered.

This is the legacy of the man Obama said was inspired by Thomas Jefferson.

The only thing Obama is fluid in is 'rabblerousing, lying, deception, hatred, division' among many more.
There's a reason his school records are hidden which among one is his 'low IQ' factor.
This guy believes his own bullsh*t and, nothing is outrageous for him because 'his existence' is outrageous.

Wisdom from the Manchurian Candidate.

Decide for yourself if Thomas Jefferson's views were similar to Ho Chi Minh's. A good place to start is Mr. Jefferson's blog. Several times each week, he posts briefly on a variety of topics, including personal liberty.
Recent posts include:
- Can an honest man be a dishonest politician?
- What do maple trees have to do with slavery?
- Did Jefferson oppose Islam?
- Rebellion, liberty, blood & manure!
- Luxury, drinking & whores! Oh my!

Read the blog at http://ThomasJeffersonLeadership.com/blog/