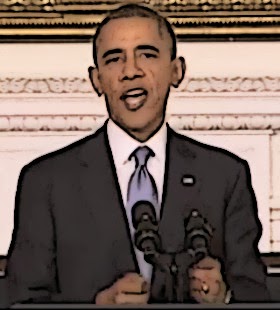 It is here that he makes the following statement:

"Now that the government has reopened and this threat to our economy is removed, all of us need to stop focusing on the lobbyists, and the bloggers, and the talking heads on radio and the professional activists who profit from conflict, and focus on what the majority of Americans sent us here to do, and that’s grow this economy, create good jobs, strengthen the middle class, educate our kids, lay the foundation for broad-based prosperity and get our fiscal house in order for the long haul."

We will ignore the irony of a president talking about "profiting from conflict" when less than two months ago the world was on the verge of World War III over a fabricated, false flag-driven invasion "confirmed" by YouTube clips, and designed entirely by this administration to further (and profit) its Saudi and Qatari interests, and which was halted in the last minute thanks to none other than the Russian president, and ask: instead of stopping to "focus on bloggers" who merely do the math in a world in which math is long forgotten, let's for one month, week or day, simply halt the Federal Reserve's circular monetary authority which now purchases virtually all issued US Treasurys that carry any duration risk.

We wonder what that would do to interest rates, to the US debt-issuance and deficit-funding machinery, to the already crippled reserve status of the dollar, to the real default threat of a country that has long passed its Minsky Ponzi point, and to the same once great nation that cemented its world-dominance not thanks to a central bank funding a government which has spent in the past 5 years almost as much as in all of its prior history, but due to the encouragement of the entrepreneurial spirit, to minimal government meddling in (and illegal supervision of) all affairs of man and commerce, to allowing not only the reward of success but the risk of failure, and most importantly to allowing capitalism to reign free once again, if only for a brief period of time.

We will not even engage the question of just how much "wealth effect" has been left on the table with the Fed not actively monetizing all US debt in 95 years of its 100 years of existence, and certainly not engage in trite religious sermonizing written by a recently graduated drama major-cum-teleprompter operator.