Power Shift: Despite the White House's much-lauded pivot to the Pacific, the Navy's Pacific commander warns that an increasingly hostile and assertive China threatens U.S. air and sea superiority in the region.

If jaws didn't drop, they should have last week when Adm. Samuel J. Locklear III, chief of U.S. Pacific Command (PACOM), said: "Our historic dominance that most of us in this room have enjoyed is diminishing, no question." 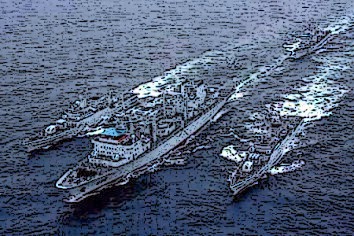 U.S. naval and air superiority, particularly in the Pacific, has been taken for granted. But as Obama administration budget cuts and the effects of sequestration take their toll, our position is being severely challenged by a Chinese military benefiting from years of double-digit spending increases and a commitment from Beijing to push the U.S. out of the area.

"We need to think about all scenarios, not just the ones we've been dealing with over the last several years, where we've enjoyed basic air superiority and basic sea superiority," he said. "There are places in the world where in this century we won't have them."

The irony is that this warning of the U.S. losing its Pacific dominance comes after the administration announced its plans for a Pacific pivot that de-emphasizes commitments in Europe and elsewhere.

President Obama pledged on Jan. 5, 2012, that his strategy would put more military muscle in Asia. The goal is to have about 60% of Navy ships dedicated to the Pacific by 2020. Of 11 active aircraft carriers, six would be committed to the region.

But these are not the heady days of President Reagan's 600-ship navy that helped buttress his strategy of "we win, they lose." Neither that Navy nor that strategy is in play anymore as the U.S. fleet dwindles from attrition while China rapidly expands its navy and develops weapons to counter ours.

One of these weapons is the Dong Feng-21D missile, intended to give China "the capability to attack large ships, particularly aircraft carriers, in the western Pacific," the Pentagon's 2012 China report said. The paper cites estimates that the missile's range exceeds 930 miles (1,500 kilometers).

In the Times story, Jin Canrong, a deputy dean of the School of International Studies at Renmin University of China, said the American admiral's comments recognize China as a rising military power. Indeed, it is. China has launched its first stealth drone, known as Sharp Sword, and is developing indigenous aircraft carriers. Its "two-ocean strategy" is based on the goal of building a fleet of five or six carrier battle groups.

China's first battle group, led by its first carrier, the Liaoning, recently conducted a monthlong exercise that saw the refurbished Soviet-built flattop and her escorts sail south to the waters near Taiwan. During the exercise, a Chinese warship nearly collided with the guided missile cruiser USS Cowpens, which was shadowing the battle group.

China recently declared an Air Defense Identification Zone encompassing the Japanese Senkaku islands. While we sent two B-52s through the zone without asking permission, the administration also advised U.S. airlines to comply with China's demands and file their flight plans with Beijing in advance.

These days are eerily reminiscent of the 1920s and 1930s, when Imperial Japan built carrier fleets while we signed naval disarmament treaties. Our ability to dominate is diminishing, and so is our will.

Democrats typically cut and run, betray, then cut defense spending as though the world is not a dangerous place. When events hit the fan it is Republicans who undertake the task of funding and re-building the military. We're into that cycle with Fast Pitch Barry and the Party of Perfidy and if we ever get flat footed and overrun lets be sure to thank a Democrat.