COMING ATTRACTIONS: Vast Stretches Of Impoverished Appalachia Look Like They Have Been Through A War 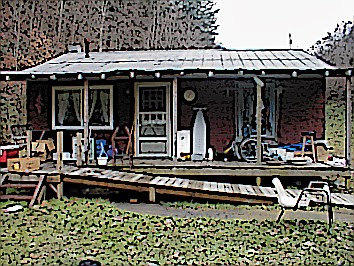 If you want to get an idea of where the rest of America is heading, just take a trip through the western half of West Virginia and the eastern half of Kentucky some time. Once you leave the main highways, you will rapidly encounter poverty on a level that is absolutely staggering. Overall, about 15 percent of the entire nation is under the poverty line, but in some areas of eastern Kentucky, more than 40 percent of the population is living in poverty. Most of the people would work if they could. Over the past couple of decades, locals have witnessed businesses and industries leave the region at a steady pace. When another factory or business shuts down, many of the unemployed do not even realize that their jobs have been shipped overseas. Coal mining still produces jobs that pay a decent wage, but Barack Obama is doing his very best to kill off that entire industry. After decades of decline, vast stretches of impoverished Appalachia look like they have been through a war. Those living in the area know that things are not good, but they just try to do the best that they can with what they have.

In previous articles about areas of the country that are economically depressed, I have typically focused on large cities such as Detroit or Camden, New Jersey. But the economic suffering that is taking place in rural communities in the heartland of America is just as tragic. We just don't hear about it as much.

Most of those that live in the heart of Appalachia are really good "salt of the earth" people that just want to work hard and do what is right for their families. But after decades of increasing poverty, the entire region has been transformed into an economic nightmare that never seems to end. The following is a description of what life is like in Appalachia today that comes from a recent article by Kevin D. Williamson...

Thinking about the future here and its bleak prospects is not much fun at all, so instead of too much black-minded introspection you have the pills and the dope, the morning beers, the endless scratch-off lotto cards, healing meetings up on the hill, the federally funded ritual of trading cases of food-stamp Pepsi for packs of Kentucky’s Best cigarettes and good old hard currency, tall piles of gas-station nachos, the occasional blast of meth, Narcotics Anonymous meetings, petty crime, the draw, the recreational making and surgical unmaking of teenaged mothers, and death: Life expectancies are short — the typical man here dies well over a decade earlier than does a man in Fairfax County, Va. — and they are getting shorter, women’s life expectancy having declined by nearly 1.1 percent from 1987 to 2007.

In these kinds of conditions, people do whatever they have to do just to survive. With so much poverty around, serving those on food stamps has become an important part of the local economy. In fact, cases of soda purchased with food stamps have become a form of "alternative currency" in the region. In his article, Williamson described how this works... It works like this: Once a month, the debit-card accounts of those receiving what we still call food stamps are credited with a few hundred dollars — about $500 for a family of four, on average — which are immediately converted into a unit of exchange, in this case cases of soda. On the day when accounts are credited, local establishments accepting EBT cards — and all across the Big White Ghetto, “We Accept Food Stamps” is the new E pluribus unum – are swamped with locals using their public benefits to buy cases and cases — reports put the number at 30 to 40 cases for some buyers — of soda. Those cases of soda then either go on to another retailer, who buys them at 50 cents on the dollar, in effect laundering those $500 in monthly benefits into $250 in cash — a considerably worse rate than your typical organized-crime money launderer offers — or else they go into the local black-market economy, where they can be used as currency in such ventures as the dealing of unauthorized prescription painkillers — by “pillbillies,” as they are known at the sympathetic establishments in Florida that do so much business with Kentucky and West Virginia that the relevant interstate bus service is nicknamed the “OxyContin Express.” A woman who is intimately familiar with the local drug economy suggests that the exchange rate between sexual favors and cases of pop — some dealers will accept either — is about 1:1, meaning that the value of a woman in the local prescription-drug economy is about $12.99 at Walmart prices.

I would encourage everyone to read the rest of Williamson's excellent article. You can find the entire article right here.

In Appalachia, the abuse of alcohol, meth and other legal and illegal drugs is significantly higher than in the U.S. population as a whole. In a desperate attempt to deal with the pain of their lives, many people living in the region are looking for anything that will allow them to "escape" for a little while. The following is an excerpt from an excellent article by Chris Hedges which describes what life is like in the little town of Gary, West Virginia at this point...

Joe and I are sitting in the Tug River Health Clinic in Gary with a registered nurse who does not want her name used. The clinic handles federal and state black lung applications. It runs a program for those addicted to prescription pills. It also handles what in the local vernacular is known as “the crazy check” -- payments obtained for mental illness from Medicaid or SSI -- a vital source of income for those whose five years of welfare payments have run out. Doctors willing to diagnose a patient as mentally ill are important to economic survival. 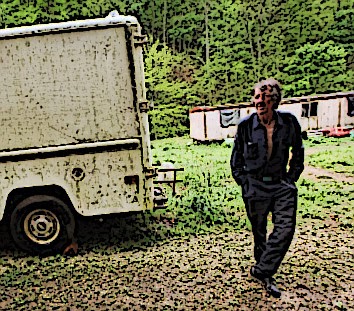 “They come in and want to be diagnosed as soon as they can for the crazy check,” the nurse says. “They will insist to us they are crazy. They will tell us, ‘I know I’m not right.’ People here are very resigned. They will avoid working by being diagnosed as crazy.”

The reliance on government checks, and a vast array of painkillers and opiates, has turned towns like Gary into modern opium dens. The painkillers OxyContin, fentanyl -- 80 times stronger than morphine -- Lortab, as well as a wide variety of anti-anxiety medications such as Xanax, are widely abused. Many top off their daily cocktail of painkillers at night with sleeping pills and muscle relaxants. And for fun, addicts, especially the young, hold “pharm parties,” in which they combine their pills in a bowl, scoop out handfuls of medication, swallow them, and wait to feel the result.

Of course this kind of thing is not just happening in the heart of Appalachia. All over the country there are rural communities that are economically depressed. In fact, according to the Wall Street Journal, economic activity in about half of the counties in the entire nation is still below pre-recession levels...

About half of the nation’s 3,069 county economies are still short of their prerecession economic output, reflecting the uneven economic recovery, according to a new report from the National Association of Counties.

So what are our "leaders" doing to fix this?

Well, they plan to ship millions more of our good jobs overseas.

Unfortunately, I am not kidding.

Republicans in the House of Representatives are introducing "fast track" trade promotion authority legislation that will pave the way for rapid approval of the secret trade treaty that Barack Obama has been negotiating. The following is how I described this insidious treaty in a previous article...

Did you know that the Obama administration is negotiating a super secret "trade agreement" that is so sensitive that he isn't even allowing members of Congress to see it? The Trans-Pacific Partnership is being called the "NAFTA of the Pacific" and "NAFTA on steroids", but the truth is that it is so much more than just a trade agreement. This treaty has 29 chapters, but only 5 of them have to do with trade. Most Americans don't realize this, but this treaty will fundamentally change our laws regarding Internet freedom, health care, the trading of derivatives, copyright issues, food safety, environmental standards, civil liberties and so much more. It will also merge the United States far more deeply into the emerging one world economic system.

Once again, our politicians are betraying the American people and millions of jobs will be lost as a result.

Not that the economy needs another reason to go downhill. The truth is that our economic foundations have already been rotting away for quite some time.

But now the ongoing economic collapse seems to be picking up steam again. For example, the Baltic Dry Index (a very important indicator of global economic activity) is collapsing at a rate not seen since the great financial crash of 2008...

Despite 'blaming' the drop in the cost of dry bulk shipping on Colombian coal restrictions, it seems increasingly clear that the 40% collapse in the Baltic Dry Index since the start of the year is more than just that. While this is the worst start to a year in over 30 years, the scale of this meltdown is only matched by the total devastation that occurred in Q3 2008. Of course, the mainstream media will continue to ignore this dour index until it decides to rise once again, but for now, 9 days in a row of plunging prices is yet another canary in the global trade coalmine and suggests what inventory stacking that occurred in Q3/4 2013 is anything but sustained.

Soon economic conditions will get even worse for Appalachia and for the rest of the country. The consequences of decades of very foolish decisions are rapidly catching up with us, and millions upon millions of Americans are going to experience immense economic pain during the years to come.

We had to drive through this area in the summer of 2012.After seeing what was happening,especially in western WVA,I sent a note to the Romney campaign suggesting they just drive through the small towns along the river beside rt 60,photograph the area and use it in a commercial saying,'This is the Obama economy.We can do better.'Needless to say,they weren't interested in advice from a mere non-political person.

Today, President Obama had an unscheduled news conference where he said, "I am breaking away from the Seahawks pre-game show to address what has recently been brought to my attention and that is the state of the economy. I can assure you that I will get to the bottom of this and the people responsible will be held accountable. I am as concerned about this as you are and will see that this is made right; thank you."