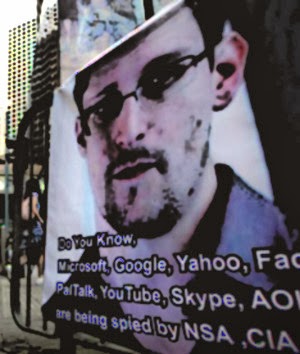 I think a person should be able to dial a number, make a purchase, send an SMS, write an email, or visit a website without having to think about what it’s going to look like on their permanent record. Particularly when we now have courts, reports from the federal government, and even statements from Congress making it clear these programs haven’t made us any more safe, we need to push back.

This is a global problem, and America needs to take the lead in fixing it. If our government decides our Constitution’s 4th Amendment prohibition against unreasonable seizures no longer applies simply because that’s a more efficient means of snooping, we’re setting a precedent that immunizes the government of every two-bit dictator to perform the same kind of indiscriminate, dragnet surveillance of entire populations that the NSA is doing.

It’s not good for our country, it’s not good for the world, and I wasn’t going to stand by and watch it happen, no matter how much it cost me. The NSA and the rest of the US Intelligence Community is exceptionally well positioned to meet our intelligence requirements through targeted surveillance — the same way we’ve always done it — without resorting to the mass surveillance of entire populations.

...The worst and happening-right-now harm of bulk collection — which again, is a euphemism for mass surveillance — is two-fold.

The first is the chilling effect, which is well-understood. Study after study has show that human behavior changes when we know we’re being watched. Under observation, we act less free, which means we effectively *are* less free.

The second, less understood but far more sinister effect of these classified programs, is that they effectively create “permanent records” of our daily activities, even in the absence of any wrongdoing on our part. This enables a capability called “retroactive investigation,” where once you come to the government’s attention, they’ve got a very complete record of your daily activity going back, under current law, often as far as five years. You might not remember where you went to dinner on June 12th 2009, but the government does.

The power these records represent can’t be overstated. In fact, researchers have referred to this sort of data gathering as resulting in “databases of ruin,” where harmful and embarrassing details exist about even the most innocent individuals. The fact that these records are gathered without the government having any reasonable suspicion or probable cause justifying the seizure of data is so divorced from the domain of reason as to be incapable of ever being made lawful at all, and this view was endorsed as recently as today by the federal government’s Privacy and Civil Liberties Oversight board.

Fundamentally, a society in which the pervasive monitoring of the sum of civil activity becomes routine is turning from the traditions of liberty toward what is an inherently illiberal infrastructure of preemptive investigation, a sort of quantified state where the least of actions are measured for propriety. I don’t seek to pass judgment in favor or against such a state in the short time I have here, only to declare that it is not the one we inherited, and should we as a society embrace it, it should be the result of public decision rather than closed conference.

This is very scary.

The government isn't going to stop collecting this data, even if they say they will. People like Obama,and Holder can use this information to target those who are against them, and they will. Obama is already using the IRS to do his dirty work, and what they can't do, or find out, the NSA can, and will, because they have no allegiance to the American people.