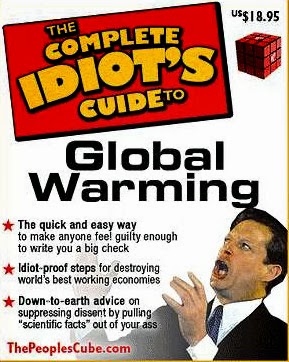 The mainstream media, long a house organ for Democrats, are about to come under pressure by Senate Democrats led by Sens. Bernie Sanders, I-Vt., and Brian Schatz, D-Hawaii, who are gathering signatures from colleagues on a letter to the networks telling them they're ignoring global warming, according to a report in the National Journal.

They are seeking to impose sort of a climate change "fairness doctrine" designed to ignore inconvenient truths about climate researchers getting stuck in Antarctic ice that was supposed to have melted in favor of the gospel according to Al Gore.

"It is beyond my comprehension that you have ABC, CBS, NBC, and Fox, that their Sunday shows have discussed climate change in 2012, collectively, for all of eight minutes," Sanders said, citing analysis by the leftist George Soros-linked Media Matters for America, which promotes media bias while claiming to fight it.

"Sunday news shows are obviously important because they talk to millions of people, but they go beyond that by helping to define what the establishment considers to be important and what is often discussed during the rest of the week," he said.

Certainly the Obama administration believes that, having sent U.N. Ambassador Susan Rice out to lie about the Benghazi terrorist attack on five Sunday talk shows.

What Sanders wants is for the major networks to become a forum for uncontested green propaganda as the British Broadcasting Corp. has become on the other side of the pond.

During what became known as "climate-gate" researchers working with and at Britain's Climate Research Unit manipulated, manufactured and suppressed whatever climate data they needed to in order to "hide the decline" on global temperatures.

So weak was their case that mankind was dooming the planet with so-called "greenhouse gas" emissions, that they had to manipulate not only the message but the messenger as well, which is what Senate Democrats want to do here.

As the Daily Mail reports, a 2006 seminar, "Climate Change, the Challenge to Broadcasting," was sponsored by a lobby group with strong ties to climate change true believers, the International Broadcasting Trust (IBT). It was attended by 28 of the BBC's top executives. The Mail on Sunday report by David Rose noted that funding for the seminar came from a British government department.

British climate blogger Tony Newbery, who filed a freedom-of-information request that the British government fought, said, "It is very disappointing that the BBC tried so hard to cover this up."

Despite official BBC denials, Newberry says, "It seems clear that this seminar was a means of exposing (BBC) executives to green propaganda."

That the seminar influenced BBC content and that there was an attempt to cover it all up was confirmed in a 2012 internal BBC document by former news chief and current head of BBC radio and event attendee Helen Boaden, according to Rose's report.

"The seminar had an impact on a broad range of BBC output spanning science programs and News reports. Some editors and executives, who attended, were inspired to be more ambitious and creative in their editorial coverage of this complex issue ... . (It) should not later be reproduced in such a way as to allow attribution. The list of attendees should not be released to third parties," said Boaden in a written statement opposing disclosure of the seminar and its attendees.

We are not sure which is worse — the attempt by researchers to "hide the decline" in global temperatures, or the attempt by politicians to use the media to hide the inconvenient truths of the climate change scam.

In any event, they are both skating on thick ice.