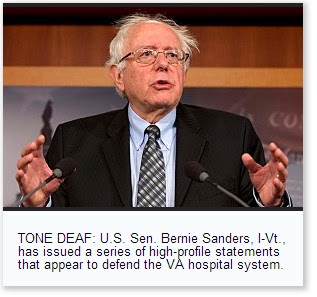 As accusations flood the Department of Veterans Affairs over systemic, severe wrongdoing at VA medical centers across the country, U.S. Sen. Bernie Sanders, I-Vt., has made a series of puzzling public statements that appear to defend the government hospital bureaucracy.

The string of statements began on May 15, when Sanders appeared on CNN for an interview with Chris Cuomo.

After urging media to remain neutral over claims that 40 U.S. veterans died at the Phoenix VA while waiting to receive care, Sanders said, “The allegation is not that the delay in care caused that, only that that is what is now being investigated.”

“Did the delay in care of these people on the secret waiting list actually cause these deaths? We don’t know,” Sanders said.

Elsewhere, Sanders appeared to gloat over the Veterans Affairs health care system, saying “the VA holds up as good or better than private hospitals. By and large, veterans throughout America believe that they’re getting pretty good health care.”

At one point, the CNN host replied, “Is it unfair criticism, senator, to say that you sound like a lawyer defending the hospital as opposed to a senator trying to make sure the right thing is done?” 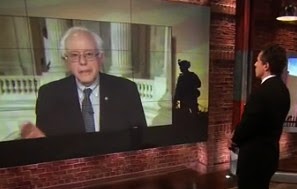 On C-SPAN that same day, Sanders, chair of the Senate Committee on Veterans’ Affairs, urged calm again, saying, “If we’re going to do our job in a proper and responsible way, we need to get the facts and not rush to judgment. And one of the concerns I have, to be very honest, is there has been a little bit of a rush to judgment.”

Darcie Johnston, director for Vermonters for Health Care Freedom, told Vermont Watchdog she was “perplexed” after watching the CNN interview, noting that Sanders, as Veterans’ Affairs Committee chair, should be outraged, not trapped in a state of denial.

“How can you deny the problem when there are 26 VAs involved?” she asked.

Johnston said Sanders’ repeated miscues raise a series of questions: “What’s he going to do about it? Why isn’t he demanding an investigation? Is he visiting any VAs when he’s on his presidential tour? Why isn’t he at the Phoenix VA?”

As recently as Thursday, Sanders said Veterans Affairs Secretary Eric Shinseki should not resign or be fired, and on C-SPAN2 Sanders was seen opposing a bill by U.S. Sen. Marco Rubio, R-Fla., that would make it easier to fire VA executives.

The statements, Johnston said, raise questions about the senator’s judgment, especially at a time when Americans are deeply troubled by a failing veterans’ hospital system that serves as the model of government-run health care.

“This is the same bureaucracy we’re going to get for single-payer health care,” Johnston warned. “If you want to know what’s going to happen to your health care, just look what happened to the VA … that’s the kind of care Vermonters can expect.”

But I guess he's worried about people dying from glObaL wARmInG.