Barack Obama, in his own mind, is incapable of formulating scenarios in which the United States, as a capitalist-based western democracy, succeeds. 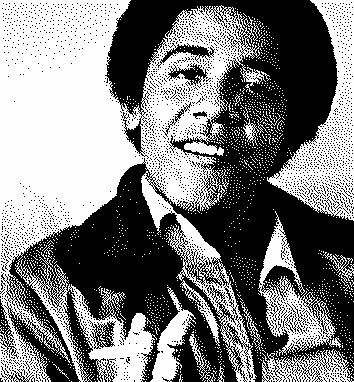 If narcissism explains Obama's personal behavior, his relationships with others and his self-centered decision-making process, then the nexus of Marxism-Leninism, Black Nationalism and Islam defines him politically, philosophies antithetical to the survival of the Constitution and the American republic.

Frank Marshall Davis was introduced to Barack Obama by his maternal grandfather, Stanley Dunham, who was a close friend of Davis and saw him as a potential role model and father-figure for his grandson. Davis was also a US Communist Party member (number 47544) and became Obama's mentor in Hawaii during the 1970s, right up until Obama left for college at Occidental, which he attended on a scholarship, one likely reserved for foreign students. That would explain why he roomed and associated with foreign students and, incidentally, may not have registered with Selective Service.

In a PBS "Frontline" documentary called "The Choice 2012," former Obama roommate Sohale Siddiqi stated "I didn't consider him American. He seemed like an international individual."

Dr. John Drew was a contemporary of Obama at Occidental College and himself a Marxist. Drew was already a well-known campus communist when Obama was introduced to him as "one of us." Drew claims that Obama "was a Marxist-Leninist in his sophomore year of college from 1980 to 1981."

It should come as no surprise that Obama transferred to Columbia University at the end of his sophomore year at Occidental in 1981, where, as a 2008 New York Times article states, Obama could "test my commitments" to social justice causes such as apartheid and poverty in the third world, and also where he reportedly earned a 2.6 (C+) grade point average.

Columbia University has long been known as a hub for leftist philosophies and political activism. During the late 1970s and early 1980s, protests were aimed at convincing the university trustees to divest all of the university's investments in companies that were seen as active or tacit supporters of the apartheid regime in South Africa; most notably the 1978 and 1985 occupation of the Business School and Hamilton Hall, respectively.

Perhaps it is not a coincidence that Bill Ayers resurfaced from his underground terrorist activities in New York City in 1980, where he began graduate studies at the Bank Street College of Education, an institution associated with Columbia University and one of whose trustees was Bill Ayers' father, Thomas G. Ayers.

According to a fellow student, who attended Columbia at the same time as Obama, Bill Ayers was then extraordinarily active on campus leading rallies ever day to drive clerical workers into the Teamsters union.

If communist and former Chicago resident Frank Marshall Davis was Obama's childhood mentor, afterwards, official life-long liberal, closet Marxist and Davis friend, Thomas Ayers, guided Obama's early career and introduced him to the radical left network of Chicago politics, first between 1985 and 1988 when Obama was a Saul Alinsky-style community organizer and later in the early 1990s after he graduated from Harvard Law School.

For example, Obama eventually interned at the Chicago law firm, Sidley & Austin, one of whose clients was Consolidated Edison, the utility company, where Thomas Ayers was Chief Executive Officer. It was also the same law firm that hired Bill Ayers' violently-radical wife, Bernadine Dohrn, who eventually joined the faculty of Northwestern University, where Thomas Ayers was once the Chairman of the Board of Trustees.

Chicago's radical left political scene also included Valerie Jarrett's father-in-law, Vernon Jarrett, a communist and friend of Frank Marshall Davis, who, in 1979, wrote about a plan by Khalid Abdullah Tariq al-Mansour and OPEC nations to fund the higher education of blacks who would then support Arab aims in the Middle East.

It is likely that Obama, who was registered as a Muslim in Indonesia, became closely associated with al-Mansour, a friend of Palestinian-advocate Edward Said, as early as age 25, when al-Mansour lectured at Columbia. Formerly known as Donald Warden, al-Mansour, an American, was a mentor of Black Panther founders Huey Newton and Bobby Seale in the early 1960s. He changed his name after studying Islam and learning Arabic. He is well known within the black community as a lawyer, an orthodox Muslim, a black nationalist, an international deal-maker and an outspoken enemy of Israel. His writings and books are packed with anti-American rhetoric reminiscent of Rev. Jeremiah Wright, Obama's disgraced former pastor.  Al-Mansour has close ties to Saudi Arabia and is a personal advisor to Saudi Prince Alwaleed bin Talal, the world's 19th wealthiest person, and the individual believed to have funded Obama's Harvard education.

Percy Sutton, the former borough president of Manhattan and lawyer for Malcolm X, was asked by his former business partner al-Mansour to write letters of recommendation to Harvard Law School in support of Obama's application.

Sutton said: "I was introduced to (Obama) by a friend who was raising money for him. The friend's name is Dr. Khalid al-Mansour, from Texas. He is the principal adviser to one of the world's richest men. He told me about Obama."

As Kurtz writes in his book, the socialist and radical Muslim networks around Obama in Chicago overlapped:

"Obama's ties to University of Chicago professor Rashid Khalidi are part of a broader web of connections between Obama, Ayers, and Chicago's leftist foundations...To make sense of the ties between this prominent Palestinian activist and Obama's radical world, keep in mind that Obama was a frequent dinner guest in the Khalidi home. At the same time, Bill Ayers was a friend to both Rashid Khalidi and his wife, Mona ... In 1999, Obama brought Ayers onto the board of the Woods Fund. In 2000, the Khalidis hosted a fundraiser for Obama's congressional run against Bobby Rush. Soon after, Obama and Ayers began channeling Woods Fund money to the Arab American Action Network, a group founded by Rashid and Mona Khalidi."

Kurtz notes: "From his teenage years under the mentorship of Frank Marshall Davis, to his socialist days at Occidental College, to his life-transforming encounters at New York's Socialist Scholars Conferences, to his immersion in the stealthily socialist community-organizer networks of Chicago, Barack Obama has lived in a thoroughly socialist [and, I might add, Muslim]world."

While Black Nationalism is about the politics of resentment, revenge and reparations, the aspirations of radical Islam and the radical left cannot be met without the subjugation of the individual and the subversion of Western democracy.

What I found intersting is that Thomas Ayers a very wealthy businessman was a Marxist. History demonstrates time after time that those who are deicated to the destruction of society are usually found at its apex. Whether it is Russian princesses who head anarchist groups of CEOs who directed Marxist cells the song is always the same.


Just why is it that these cancerous cells are allowed to grow?