DECODING THE ADMINISTRATION'S LIES: "Khorosan" is Al Qaeda and it is most definitely not "on the run" 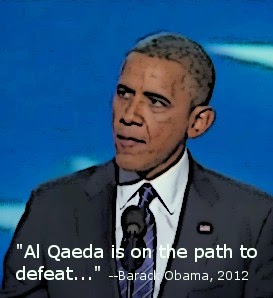 Obama’s approach to foreign policy is the stuff of fiction. He likes to say Al Qaeda has been destroyed and all that’s left are the metastasized rogue bands of terrorists acting independently of Al Qaeda Central. One band in particular is the Khorasan group.

It’s been referred to as the old boys’ club. It is that.

It is comprised of the Osama bin Laden followers from the 1990’s. They are not an affiliate, or an offshoot, or a franchise. They ARE al Qaeda and they follow the leadership of al-Zawahiri, Osama’s successor.

They have been dangerous since 2009 and they have been unremittingly dangerous. They were responsible for the underwear bomber, the Christmas Day bomber and many other bombings.

They didn’t become dangerous yesterday, last month or even last year. They’ve been dangerous since Barack Obama became president and they have been dangerous the entire time Obama said al Qaeda was on the run.

If you think bombing a command center will eliminate them, think again. They are the most seasoned of al Qaeda veterans.

ISIS is al Qaeda also. They just don’t want to go as slowly as al-Zawahiri wants to go and they don’t want him in charge.

All these groups are brutal. Believing that any group is too vicious for al Qaeda is misguided thinking.

Obama has this tale he puts forth about ending the wars and destroying al Qaeda but it’s based on air. He said the economy was linked to it but he’s made the economy worse with a record 92+ million Americans out of the workforce.

If you believed this, don’t believe it any longer because we’re not safe. Our borders are open. Anyone can fly in or walk across. That is not safe.