Hey, who's up for an Obama third term?

In an interview with CNN, former Press Secretary Jay Carney says that Hillary was a “big part” of Obama’s foreign policy. 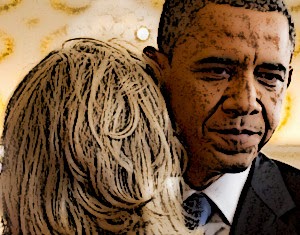 CNN: We're starting to see blind quotes from Hillary Clinton "aides" expressing criticism of Obama's handling of Syria and Iraq. If she runs for president, how does Hillary balance the thornier parts of Obama's record with her time in the administration?

Carney: Obviously that's something that she will figure out if she decides to run. She was Secretary of State for President Obama for four years and she understands that that record that will be part of what she runs on. Her time as Secretary of State is something she should be proud of, and the president's record on foreign policy is something she is more likely to embrace than anything because she was a big part of it.

We agree with Carney!

Hillary "should be proud of" her foreign policy record and should "embrace" and "run on" Obama's magnificent accomplishments.

So in other words Killary would do nothing as well, other than aid and abet our enemies.

What difference, at this point, does it make?