Economy In Crisis: A new study by the Illinois Policy Institute shows in the past four years, the number of new food-stamp recipients in the state has outpaced new jobs nearly 2-to-1. 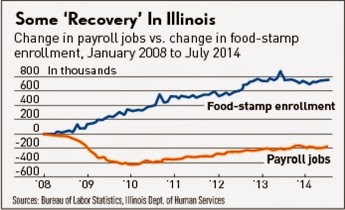 Illinois Democratic Gov. Pat Quinn, locked in a tight re-election battle with self-made billionaire Republican Bruce Rauner, has been arguing that Illinois, arguably the bluest of blue states, has turned the fiscal corner and is on its way back.

The recovery may be slower than Quinn wants it to be — but, he says, it is real.

It is an odd recovery, though, that makes more people dependent on government through food stamps than on a paycheck.

A stunning analysis by Michael Lucci, director of jobs and growth at the Illinois Policy Institute, shows that from January 2010, when job losses in Illinois bottomed out, to July of this year, the state gained only 240,000 jobs. Over the same period, it added 420,000 food stamp recipients.

Real the Illinois "recovery" is not. As Lucci reports, there are some 300,000 fewer Illinoisans working today and 170,000 fewer payroll jobs than in January 2008. Illinois' labor-force participation rate is at its lowest point since 1979, and the state is dead last in private-sector job creation for the first seven months of 2014.

It doesn't help that in 2011, Quinn kept his promise to raise taxes on everyone in Illinois by 67% in what was supposed to be a temporary fix to deal with the state government's pension crisis. The tax hike is now permanent, Illinois' fiscal woes continue, and a clear signal has been sent to businesses that the Land of Lincoln is not a friendly business environment.

It is in fact an economic black hole encircled by more promising business climates in Wisconsin, Indiana and Michigan, all states with GOP governors.

Wisconsin Gov. Scott Walker showed that it is possible to take on the teacher unions with their bloated pensions while reducing the tax burden and promoting job growth. Indiana and Michigan have become right-to-work states, recognizing that forced unionism stifles growth.

Illinois unions have taken notice and are concerned. Yet they try to rationalize the attractions of friendlier business climates in traditional rhetoric.

"Illinois is part of the pattern — these rich folks are going wherever they see an opportunity, just like they did in Wisconsin, Indiana and Michigan," said Henry Bayer, former executive director of AFSCME Council 31, representing 95,000 Illinois workers and retirees. "Illinois is experiencing some real difficulties, so they think they can make some inroads."

This is not surprising. Illinois, the land of rising taxes, ranks first in home foreclosures, according to Bankrate.com, which tracks home foreclosures across the nation. One in every 747 homes in Illinois has foreclosed vs. one in 1,200 nationally.

The natives are restless. In January, the state had the country's third highest unemployment rate at 8.7%, the highest unfunded pension liability at $100 billion and the lowest credit rating. It has suffered 13 downgrades from the three major rating agencies since Quinn took over as governor from the disgraced and currently incarcerated Rod Blagojevich in 2009.

The lesson is clear. Blue states in thrall to big government and big labor are economic wrecks. The people of Illinois face a choice of voting with their feet or their hands for a different path come November.