The 7 Most Despicable Acts by Eric Holder as Attorney General

Attorney General Eric Holder, the first attorney general in history to be held in contempt by the House of Representatives, surprised the political world today when he announced he would be resigning, effective on the confirmation of his successor. 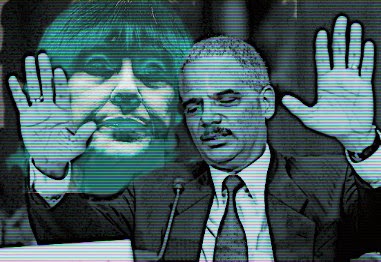 Holder will leave a troubled legacy and many unanswered questions as John Fund and I discovered when we were researching our new book, “Obama’s Enforcer: Eric Holder’s Justice Department.” The Justice Department veterans we talked to said that Holder has politicized the Department to an unprecedented degree, which should concern everyone who cares about the rule of law.

So what are the top seven worst actions by Eric Holder?

1. Operation Fast and Furious, probably the most reckless law enforcement operation ever carried out by the Justice Department. This gun-running scandal led directly to the death of an American border agent and many Mexican citizens. Holder was held in contempt because of his refusal to turn over information and documentation about this operation gone wrong that he basically claimed he knew nothing about.

2. Holder has waged a war on election integrity and “racialized and radicalized the [Civil Rights] Division to the point of corruption” according to one current Justice employee, embedding “politically leftist extremists in the career ranks who have an agenda that does not comport with equal protection or the rule of law; who believe that the ends justify the means; and who behave unprofessionally and unethically.”

3. Failure to conduct a real, criminal investigation of the IRS targeting of conservative organizations and to enforce the contempt citation issued by the House of Representative against Lois Lerner.

4. Reinstituting the Clinton-era model for handling terrorists that endangers the national security and safety of the American people and going after journalists in leak investigations while ignoring leaks coming out of the White House from high-level administration officials.

5. Failing to advise President Obama against taking actions that violate the Constitution and federal law, refusing to enforce or defend federal laws and trying to persuade state attorneys general to engage in the same type of behavior of refusing to defend laws passed by their state legislatures.

6. Engaging in collusive “sue and settle” lawsuits with advocacy organizations and political allies of the president in order to implement regulations and new requirements without public notice or participation in order to use taxpayer money to fund the budgets of liberal groups.

7. Treated Congress with contempt and did everything he could to evade its oversight responsibilities by misleading, misinforming and ignoring members of Congress and its committee.

There is no telling how long it will take to repair the damage that Holder has done to the Justice Department. History will not be kind to his legacy. As one former Justice Departmentemployee told us, in his opinion, “Holder is the worst person to hold the position of attorney general since the disgraced John Mitchell, who went to jail as a result of the Watergate scandal.”


Read more at the Daily Signal

Holder was Obama's urinal cake and he liked it, we know he did because he kept licking his lips.

With all the leftists Barry has installed in career positions, I'm not sure we CAN fix it.