THE WAR ON POVERTY: 50 Consecutive Years of Failure

Robert Rector, writing in The Washington Times, writes the epitaph of the catastrophic disaster -- for all involved -- known as "The War on Poverty." 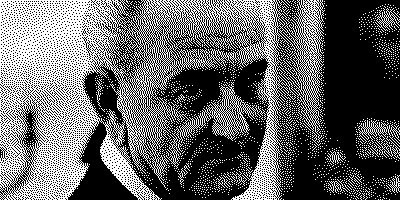 This year marks the 50th anniversary of President Lyndon Johnson’s launch of the War on Poverty. In January 1964, Johnson declared “unconditional war on poverty in America.” Since then, the taxpayers have spent $22 trillion on Johnson’s war. Adjusted for inflation, that’s three times the cost of all military wars since the American Revolution.

Last year, government spent $943 billion providing cash, food, housing and medical care to poor and low-income Americans. (That figure doesn’t include Social Security or Medicare.) More than 100 million people, or one third of Americans, received some type of welfare aid, at an average cost of $9,000 per recipient. If converted into cash, this spending was five times what was needed to eliminate all poverty in the United States.

By the government's own measures, the drop in the percentage of individuals qualifying as poor ended once the "War" truly got underway. 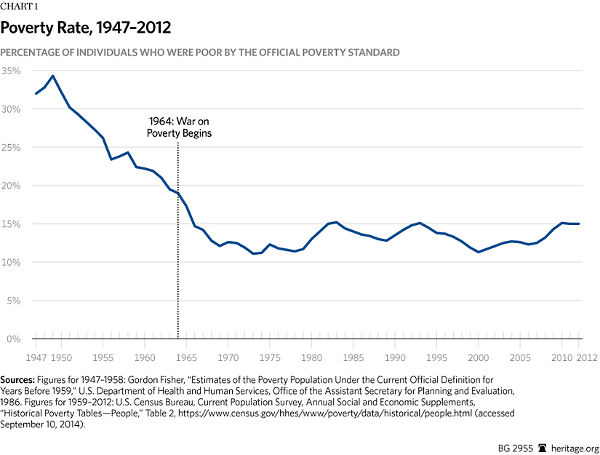 In fact, begin "poor" ain't what it used to be during, say, the Great Depression.

The actual living conditions of households labeled as poor by Census are surprising to most people. According to the government’s own surveys, 80 percent of poor households have air conditioning; nearly two-thirds have cable or satellite television; half have a personal computer; 40 percent have a wide-screen HDTV. Three-quarters own a car or truck; nearly a third has two or more vehicles.

In order to justify the massive transfers of wealth engendered by the "War", President Lyndon Johnson predicted that the programs would reduce the number of Americans on welfare and transform many "tax-eaters" into "taxpayers". In fact, the opposite happened, as it does so often when the federal government exceeds its Constitutional authority.

For a decade-and-a-half before the War on Poverty began, self-sufficiency in America improved dramatically. For the past 45 years, though, there has been no improvement at all. Many groups are less capable of self-support today than when Johnson’s war started. 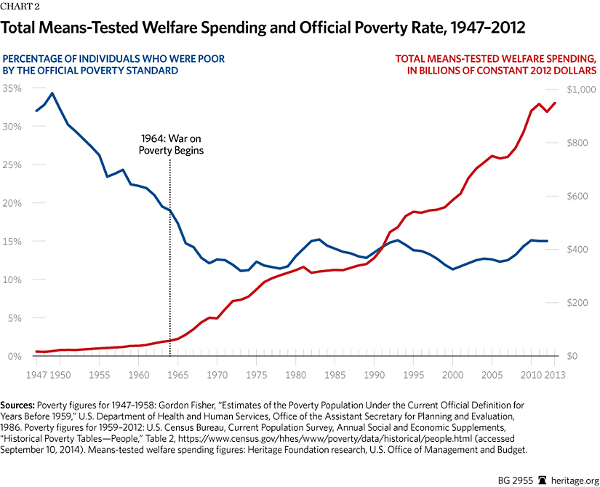 The culprit is, in part, the welfare system itself, which discourages work and penalizes marriage. When the War on Poverty began, 7 percent of American children were born outside marriage. Today, the number is 41 percent. The collapse of marriage is the main cause of child poverty today.

The folly of Obama and the Democrats' incessant push for more wealth redistribution -- after five decades of unbroken failures -- is obvious to any thinking American.

The welfare state is self-perpetuating. By undermining the social norms necessary for self-reliance, welfare creates a need for even greater assistance in the future. President Obama plans to spend $13 trillion over the next decade on welfare programs that will discourage work, penalize marriage and undermine self-sufficiency.

Which, some might say, was the plan all along.

The effects of subsidizing poverty are remarkably clear: these programs destroy two-parent families, sentence children to lives of poverty, and frequently lead to violence and imprisonment.

Any rational human being would look at the facts and reconsider the entire "War on Poverty".

It remains to be seen whether any Democrat qualifies.

The real crime is that the plethora of anti-poor programs make staying with them a completely rational judgement. To a poor beneficiary of government largess, including just the big gun benefits and not the whole panoply of possible goodies, taking a job which might disqualify them from their benefits effectively subjects them to a marginal tax rate that can be more than 100% because any employment they are likely to get will, at least at the beginning and probably for a long duration, not be able to provide an income equal or greater than the value of their benefits.