WHAT THE MEDIA WON'T TELL YOU: Oklahoma Jihadist Beheader Stopped by... One Good Guy With a Gun

War On Terror: The Islamic State's call for "lone wolf" attacks on Western infidels might have met its match in the Second Amendment, as an armed man saves lives by shooting a jihadist wannabe bent on heeding that call. 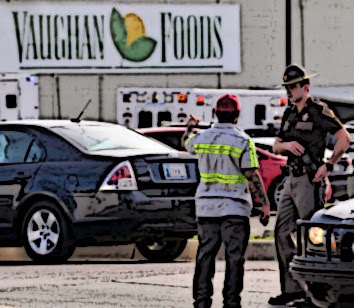 Vaughan Foods employee Traci Johnson is alive today because the business she works for is not a gun-free zone at a time when the Islamic State is encouraging attacks on infidels in the West like the one in Moore, Okla., where co-worker Colleen Hufford was stabbed and beheaded.

The alleged attacker, 30-year-old Alton Nolen, was stopped as he was stabbing and preparing to behead Johnson by Mark Vaughan, the food distributor's chief operating officer. Vaughn, who is also a reserve county deputy, drew the gun he was carrying and stopped Nolen, police say, before he could claim more victims.

"This was not going to stop if he (Vaughan) did not stop it," Moore Police Sgt. Jeremy Lewis told the media.

Some will claim this is more "workplace violence" — a phrase used by the Obama administration to describe the carnage left by Maj. Nidal Hassan at Ft. Hood — the work of a disgruntled ex-employee with no significance beyond that.

But the similarities are eerie and may indicate the shape of a new threat we face.

Nolen was a recent convert to Islam and while still an employee at Vaughan tried to convert his co-workers, they said. He was convicted in 2011 of multiple felony drug offenses, assault and battery on a police officer and escaping from detention.

He was released from prison in March 2013. It is suspected that much of his Islamic conversion occurred while he was in prison, an increasingly common phenomenon among African-American inmates.

Nolen's Facebook page contains such items as a burning lower Manhattan after the 9/11 attacks and a photo of the pope with the caption "Sharia Law is coming!"

In March, Nolen posted a gruesome photo of a beheading with the explanation that "Islamic terrorists behead their victims" because of a precedent bestowed by their prophet, a reference to the Prophet Mohammed's frequent beheadings of those he considered infidels.

Nolen might be a lone wolf, but he's just the type the Islamic State is looking for: individuals angry at a society and culture they see as victimizing and oppressing them.

They don't need to sneak across the border — they're already here. They don't even need passports, which many have, such as the Minneapolis airport worker who fought and died for IS in Syria.

No direct connection has been established. But Nolen is what IS spokesman Abu Mohammed al-Adnani said the group is looking for in a videotaped statement released shortly before the attack in Moore.

"If you can kill a disbelieving American or European — especially the spiteful and filthy French — or an Australian, or a Canadian, or any other disbeliever from the disbelievers waging war, including the citizens of the countries that just joined a coalition against the Islamic State, then rely upon Allah, and kill him in any manner or way, however that might be."

That was the possible motivation of 18-year-old Abdul Numan Haider, who was shot dead after he stabbed two Australian counterterrorism officers on Sept. 23, police said. Haider had been asked to come to a police station after he'd been seen with an Islamic State flag at a shopping center.

The Islamic State has issued a global call to lone wolves. One could be standing behind you on the bus, walking next you at the mall or sitting in the next cubicle. In the age of the Islamic State and solo terrorism, gun-free zones are simply an invitation for a terrorist attack.

In Moore, Okla., the life-saving value of the Second Amendment was proved once again. It may be our secret weapon in the ongoing war against terrorism.

Employers need to stop hiring Muzlims. If one shows up in third world attire after the hiring dance, then perform them out.
Period.