What Obama Doesn't Know Could Fill a Book

The Wall Street Journal's Bret Stephens lays down #44's litany of failure, noting that all presidents make mistakes, but what distinguishes Obama is "his ideological rigidity and fathomless ignorance." 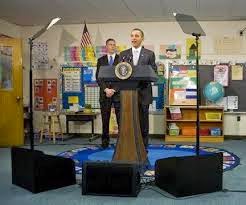 ...even at an elementary level, Mr. Obama often doesn't know what he's talking about. It isn't so much his analysis of global events that's wrong, though it is. The deeper problem is the foundation of knowledge on which that analysis is built.

You mean an inexperienced community agitator raised by Marxists doesn't have a realistic worldview? The hell you say!

In situation after situation, Obama has made the wrong call -- often obviously and catastrophically wrong -- each of which holds the potential for dire consequences around the globe.

In 2009 Mr. Obama decided to elevate Turkey and its prime minister, Recep Tayyip Erdogan, as his core partner in the Middle East. "On issue after issue we share common goals," he told the Turkish parliament in April 2009. In 2012 he said that he and Mr. Erdogan had developed "bonds of trust."

Yet in 2009 it was already clear that Mr. Erdogan was orchestrating huge show trials against his political opponents based on outlandish charges. By 2010 it was clear that he was an avowed supporter of Hamas, not to mention a vocal anti-Semite. In 2012 the Committee to Protect Journalists noted that Turkey had more journalists in prison than China and Iran put together.

Asia and Latin America were publicly lauded by Obama even as China's military aggressively expanded its reach and Argentina, Brazil, Ecuador and Venezuela are economic basket-cases.

In 2012, after the Arab Spring, the president singled out Yemen as a model for a prospective political transition in Syria. Mr. Obama was at it again just two weeks ago, citing the fight against al Qaeda in Yemen as the model for the war he intends to wage against the Islamic State in Iraq and Syria.

He declared victory over al Qaeda and dismissed groups such as ISIS as "the jayvee team" at the very moment that al Qaeda was roaring back.

He mocked the notion of Russia being our enemy—remember the line about the 1980s wanting "its foreign policy back"?—just as Russia was again becoming our enemy.

That faint chortling sound you heard is Vladimir Putin in eastern Ukraine.

He predicted in 2012 that "Assad's days are numbered" just as the Syrian dictator was turning the tide of war in his favor.

And what about the most dangerous regime on Earth?

He defended last November's nuclear deal with Tehran, saying "it's not going to be hard for us to turn the dials back or strengthen sanctions even further" in the event that diplomacy failed. In reality, as the Foundation for Defense of Democracies notes, "burgeoning trade ties with Turkey, increased oil sales to China, and reports of multibillion-dollar Russian-Iranian trade deals, not yet consummated but in the offing, are giving [Iran] a 'Plan B' escape hatch."

What happens when everything a President knows is wrong?

We're beginning to find out. And we have two very long years left.

A LITTLE knowledge is VERY dangerous
-
Øbama is proof positive

He thinks he's always the smartest, most knowledgable person in the room.

First, if a politician can't find someone both smarter and more knowledgable about any particular subject, then that politician sucks at hiring people.

Second, it's been shown that when you're incompetent, you lack the skills needed to assess competence, so you'll think you're a lot more competent than you actually are. Seems to describe him to a "T".

How does Bret feel to be 6 years behind the curve?

It's unfathomable how anyone with half a brain could not have seen through the fraud of 'Barack Hussein Obama.'

We now have monsters -- and a gorilla named Michelle -- running our government. And we tolerate lemmings heading the GOP and a porcine failed Klown advising them.