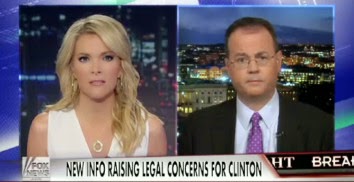 MEGYN KELLY: Shannen, good to see you tonight. So, let's start with the broad brush, which is she followed all the rules, all the rules and she didn't commit any crimes whatsoever. You've been maintaining all along that's not necessary -- it's not true on the rules and it may not be true on the law if she concealed or destroyed federal records.

SHANNEN COFFIN, FORMER COUNSEL TO VICE PRESIDENT CHENEY: It's demonstrably not true on the rules. She didn't comply with the Federal Records Act. And she clearly did not comply with her own records management handbook for the Department of State which sets out a very specific process about how you remove records from the department control.

KELLY: And I want to go through that with you because this, I mean, this is the thing that everybody needs to pay attention to tonight. The language that is in this document which she would have been required to sign prior to leaving the State Department, if she wasn't that raises an additional set of problems. Here's the question. Before you leave the State Department you have to jump through a bunch of hoops as it turns out when it comes to your email and your documents including you must prepare an inventory of personal papers and non-record materials that you are proposing for removal. You must then request a review of those materials that you've proposed for removal. And then the rule requires the State Department to do what?

COFFIN: The records officials of the State Department have to actually go through those records with her and determine if she wants to remove them, take them with her -- she says, these are say personal documents, determine whether they are in fact personal documents -- and the State Department records manual says that's kind of a difficult call. And it requires the professional judgment of a records official. And so that records official will go through with the secretary, all of her records and say, this is in, this is out, you can keep this, this has to stay.

KELLY: So when she talks about how, look, it's an honor system and every federal employee gets to sort of cull through their documents when they leave their positions and decide what's personal and what's business. She's right, it is initially an honor system. But what she didn't disclose is there's a process built in that has a little check and balance on the honor system where a State Department official, even if you're dealing with the secretary, is supposed to sit down with her before she leaves and put another set of eyes on it and a set of hands on the documents she means to take with her.

COFFIN: That's exactly right. And she's right. Look, every federal employee has to make some sort of threshold determination about whether a document is personal and -- or whether it's official. Now, that -- there are very strict standards for that. And the standards say, you know, if there's any doubt -- the State Department standards say -- if there's any doubt you have to default to this being an official document.

KELLY: Yes, you have to leave it with us, you can't take it with you, Hillary.

KELLY: But now she's saying, Shannen, look, OK, there's sort of with a wink and a nod, you know, she said she'll comply with all rules. We know that's not true. But it's sort of like, well, two years later I complied with all the rules. I've given it all back now. That's good enough.

COFFIN: Again, it's just absolutely not good enough. The State Department regulations also say that departing officials have to make sure that all of their official records are in the files of the Department of State upon departure. That couldn't be any clearer.

KELLY: Let's put the language on the board so viewers can see it themselves.

This is State Department records manual that says departing officials, quote, "Must ensure that all record material they possess is incorporated in the department's official files and that all file searches for which they are tasked have been completed, such as those required to respond to FOIA, Freedom of Information Act, Congressional or litigation-related document requests." And it goes onto say, and by the way, if you don't do it, all State Department employees including the secretary, "fines, imprisonment or both may be imposed for the willful and unlawful removal or destruction of records as stated in the U.S. criminal code."

COFFIN: That's exactly right. And a couple pages later the same manual says -- and this includes emails as well. So there's no doubt looking at that but wherever the secretary had those records -- if she had them in her Chappaqua home, if she had them in her office, if she had them somewhere else, she's got to bring all of the records to the table and turn over any official records at the time of her departure. Not, most definitely not, two years later.

KELLY: It makes perfect sense. This is a State Department trying to comply with its obligations under the law, trying to say to the secretary, look, we're going to get hit with FOIA requests, Congressional requests, subpoenas and so on. We have to make sure our files are up to date and you've got your stuff before you leave. And so, she either did that certification to the State Department untruthfully, right? She either said they had everything when they didn't --

KELLY: -- or for some reason she didn't do it. And we asked the State Department for an answer to that. So far tonight we don't have it. We expect and hope we'll get it tomorrow.

COFFIN: Megyn, every employee at the State Department has to sign this little piece of paper when they leave the State Department. And it says I certify basically under penalty of perjury that I have returned all official records that were in my possession while I was an officer of the Department of State. So where is that document, Megyn? And if there isn't -- if she didn't sign that, why not? There are a lot of questions to be answered.
Watch the video at RealClearPolitics.com

It is ridiculous to discuss the matter this way. There are thousands of laws and little pieces of paper to sign. Hillary didn't sign one of them. So what?

The legal failure is to not sign a document, or not remit all relevant material to the government. The underlying complaint is political, not legal. Hillary has seen to that, along with almost every other politician and high bureaucrat.

Many appointees have used personal emails and made up identities to effectively hide their possible illegal or embarassing dealings. We have a ridiculous interpretation of law, that this behavior to hide evidence is not in itself illegal. Supposedly, we have to show that the destroyed material showed illegality despite not having that material.

We are stuck. The politicians wrote the law which seems to bind them, but actually protects them. The laws are numerous, many are broken each day, and so the peasants may be arrested at will, and the politicians can say "just another little, nuisance law".

Even if some real law is broken, who is going to prosecute? Hah, Democrat Eric Holder.

The discussion should be political. Hillary didn't misplace one piece of paper. She hid her entire communications while acting for the government. She has done the same thing that Osama bin Laden did to avoid capture. Why should the public accept such blatant behavior?

NO ONE in the Obama administration has any respect for the law or the Constitution.

Nothing will happen to her but she might have to drop out. I get the feeling Obama would like an even more hard left candidate like Elizabeth Warren. The newspapers are going after her and Obama controls them to a large degree.