Yesterday, Iran's leaders were quoted as saying: "...a society steeped in the spirit of homicide bombings is unstoppable."

Today, we discovered that Iran plans to engage in a nuclear EMP (electromagnetic pulse) attack on the U.S., which would effectively destroy the electric grid and kill tens of millions. Paul Bedard reports: 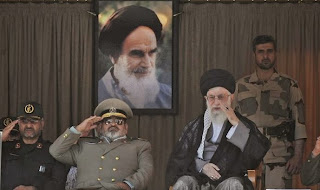 Suspected for years of plotting to dismantle the U.S. electric grid, American officials have confirmed that Iranian military brass have endorsed a nuclear electromagnetic pulse explosion that would attack the country's power system. A knowledgeable source said that the textbook discusses an EMP attack on America in 20 different places.

Arizona Republican Rep. Trent Franks, who is leading an effort to protect the U.S. electric grid from an EMP attack, has recently made similar claims based on the document translated by military authorities.

Once sneered at by critics, recent moves by Iran and North Korea have given credibility to the potential EMP threat from an atmospheric nuclear explosion over the U.S.

Pry has suggested ways for Iran to deliver a nuclear attack: by ship launched off the East Coast, a missile or via satellite.

Either way the result could be destruction of all or part of the U.S. electric grid, robbing the public of power, computers, water and communications for potentially a year.

Such an attack would be horrific to contemplate. Let "Operation Starfish" paint the scenario for you, if you have the stomach.