It's still startling when a few courageous individuals dare to speak truth to power. Ambassador John Bolton is one such : 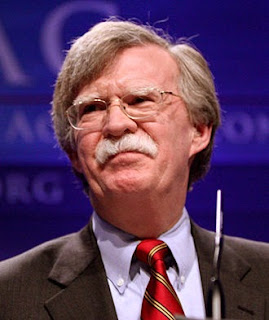 I think the most telling information that we have seen in this limited number of emails is that there are repeated examples of Secretary of State Clinton being told in 2011 and 2012 that the security situation of our personnel in Tripoli and Benghazi was very precarious. The country’s government had fallen apart—that the threat from terrorist attacks was high and that our people were very concerned about it.

Now you’ll recall in her limited public appearances to date that she has said, you know, I don’t get involved in that security stuff, you know, I have people that do that. Well I have to say when I heard that I was stunned. I’ve worked for six different secretaries of state, everyone of them coming from very different backgrounds, every one of them cared about the safety of the Americans who worked for them in the State Department. And not one of them would have missed the danger that our diplomats in Libya faced. And this was called to her attention repeatedly and she didn’t do anything about it. So When we ask the question, who is responsible for the tragedy of the murder of U.S. Ambassador Christopher Stevens and three other Americans in Benghazi, there is a very clear answer. It was Hillary Clinton.

Of course, anyone could have arrived at the same conclusion years ago if he or she had read "DAMNING: The Complete Benghazi Timeline Spreadsheet", which was first published in 2013.