D.C. PROF TELLS CATHOLIC UNIVERSITY: There are Way Too Many Crosses on Campus for Muslims to Pray 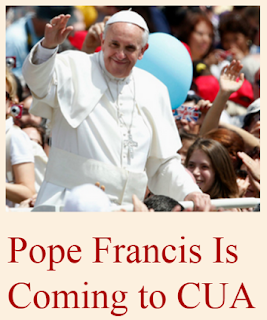 It just got surreal. George Washington University Law School Professor John Banzhaf filed a human rights complaint to the D.C. Office of Human Rights against Catholic University for hindering Muslim students’ free exercise of their faith due to the “excessive” amount of “Catholic imagery” on the campus. It seems that this man – who teaches at a different school across town – thinks that Catholic University’s adherence to the cultural aspects of Catholicism (we have a lot of artwork, Crucifixes, and statues in every nook and crany) keeps muslim students from praying the required five times a day.

...Just as an aside from a graduate of Catholic high school, at least, did Prof. Banzhaf not see the title of the university? Did he not see the GIGANTIC church on the university property we know as the National Basilica of the Shrine of the Immaculate Conception? ... What part of “Catholic” isn’t sinking in? We’re into high art, Jesus hanging on the Cross, defending the separation of the sexes in dorms, etc. It’s part and parcel of the deal when you attend Catholic school.

Across the board, the 60-page complaint filed by Banzhaf has officials at Catholic University and just about every other corner scratching heads. [It seems that] no muslim students have voiced concern for the issues of which Banzhaf writes.

Dan from New York: "Still confused about what Pamela Geller is fighting against? Give the Muslims an inch and they'll take a mile. And of course, this is only their first step of what the Muslim cadres have already accomplished in Britain and Europe, where they’ve moved on to bigger and better things.