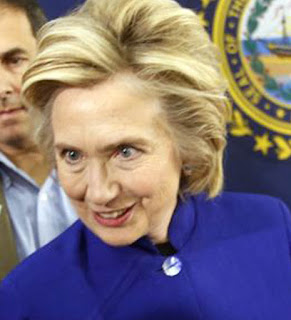 For the last two weeks, Hillary has been presenting herself as “human” and “likable”, as promised by her campaign staff . This week, she’s “tough” and having “candid” meetings with the Soros-funded BlackLivesMatter extremists.
She might be considering making some alarming promises.

Slate published an article in June about Hillary titled, One Tough Mother. The subtitle was, Hillary Clinton’s campaign is going to sell her as a fighter like no other.

Her fight, Slate wrote, quoting her campaign, would be on four tough issues: advocating for families, removing money from politics, increasing wages for the middle class, and protecting America. She’s now considering adding the issues of radical black Marxists to her platform.

She met with BlackLivesMatter on Friday.

“We had a tough conversation about de-centering the police as the key mechanism to ensuring safety in communities. And we also had a spirited conversation about alternatives to policing,” Deray McKesson, one of the leaders of the Campaign Zero, a Black Lives Matter group – told Politico.

These people want the police out of their neighborhoods completely.

The meeting held at the National Council of Negro Women in Washington D.C. is in preparation for her criminal justice reform platform which she will roll out in the next few weeks.

Radicals Brittany Packnett and Johnetta “Netta” Elzie were also at the meeting. Hillary is meeting with the same people the Obama administration has glorified and who have, in many cases, criminal and Marxist backgrounds.

“She reaffirmed her policy on private prisons and immigrant detention centers — she wants to end those,” the Clinton aide said.

McKesson is looking forward to seeing her plan which could prove to be a pandering, leftist piece of work that damages the justice system.

Brittany Packnett tweeted this concerning comment, “Since my last conversation with @HillaryClinton, she was a bit more willing to consider the federal-not just community-role in change.” It’s not known how her private prison donors will feel about it.

There is a strong movement from the left to nationalize police and it looks like Hillary is willing to go there to get elected. Between the 21st Century Policing program and the U.N. Global Police Force, and the demands of the Marxist members of the black community, nationalization is a given if a Democrat wins election in 2016.

Taking the police out of the hands of local control is dangerous. There will be no accountability as there is no accountability with our government agencies now. We have all seen what the IRS, BLM, EPA and others are doing with unelected bureaucrats making all the decisions. Taxes would go to troubled areas in what would be another form of redistribution. Deployable national forces are completely reactionary. It would do nothing to improve problems with police.

Hillary’s future is in the hands of Barack Obama who can control the decisions that come out of the DOJ about her outrageous handling of national security. Catering to his leftist views can’t hurt her chances of survival.

Hillary has been accused of flip flopping on almost everything from TPP to gay marriage to amnesty and she continually ducks the press and that, along with her scandals, have made her look weak, so,now, as if on cue, she's getting really tough, again, but tell me, do you want her answering that 3am phone call?