OBAMA'S IRANIAN PARTNERS IN PEACE: Now Is the Time for a Holy War to Eradicate the Israeli "Cancer"

Iranian Supreme Leader Ayatollah Ali Khamenei on Tuesday described Israel as a “cancerous tumor” and called for a “holy intifada” to destroy the Jewish state.

Khamenei’s latest threat came in a speech introducing the regime’s sixth conference in support of a Palestinian intifada, or violent uprising against Israel. The conference was held in Tehran and had seats reserved for the heads of the terrorist groups Palestinian Islamic Jihad, Hamas, and Hezbollah, according to The New York Times. All three groups have received funds, intelligence, and weapons from Iran.

The creation of Israel “is another dirty page in history which will be closed with the permission and assistance of Allah the Exalted, just like other dirty pages in history,” Khamenei said in his speech, according to a translation posted on his website.

“The illegitimate entity of the Zionist regime will continue to exist only if it is founded on the ruins of Palestine’s identity and entity,” he added. “That is why protecting Palestinian identity and guarding all the symbols of this truthful and natural identity is a necessity and a holy jihad.” 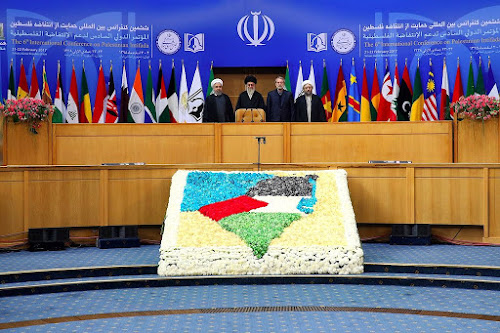 The Jerusalem Center for Public Affairs observed in a report published last week that the nuclear deal has not stopped Iran “from propagating Israel’s destruction.” Khamenei has been quoted describing Israel in July as an “illegal and filthy Zionist regime,” and long-range ballistic missiles tested by Iran in March had the phrase “Israel should be wiped off the map/face of the earth” written on them in Hebrew.

“The combination of an extreme Islamist ideology that repetitively preaches the destruction of Israel, boasts of its advanced missile program and seeks to return to the bosom of the Western world makes Iran all the more dangerous,” the report noted.

After negotiations, in Zionist regime they said they had no more concern about Iran for next 25 years; I’d say: pic.twitter.com/dBA7oAbFPX

In 2015, the report noted, Khamenei shared a timeline for Israel’s destruction on social media. Numerous Iranian generals and top officials offered particulars on how Israel will meet its end, with Brig. Gen. Ahmad Reza Pourdastan, ground force commander of the Iranian army, saying in October 2015: “If Israel makes any move, we will react with the Islamic Republic of Iran’s long-range missiles.” Purdastan said his wish was “see Israel make a move to put the Supreme Leader’s remarks into action as soon as possible.”

Ahmad Karimpour, a senior advisor to the Islamic Revolutionary Guards Corps’ (IRGC) elite Quds Force, said in May: “With the facilities and equipment we have, we can raze the Zionist regime to the ground in less than eight minutes if we ever decide to act, based on the Supreme Leader’s orders.” This was a reference to Khamenei’s 2013 promise to “raze Tel Aviv and Haifa to the ground” if Israel ever attacked Iran.

Khamenei’s senior military adviser, Brig. Gen. Yahya Rahim Safavi, likewise said in July, “The unity of Muslims, support for the Islamic Resistance and the continuation of armed jihad [sacred war] is the main strategy for the liberation of Palestine….Strengthening jihadist groups, particularly arming the people of the West Bank, with its 3 million-strong population, is one of the duties of Muslims…. The arming of the West Bank will make the Zionists lose control (of the West Bank).”

This is the latest in a series of reports by the Jerusalem Center for Public Affairs cataloging promises by Iranian leaders to destroy Israel. The first report was produced in 2008, prompted by then-President Mahmoud Ahmadinejad’s 2005 comment that Israel should be “wiped off the map.” A followup report was issued in 2012, covering the threats issued against Israel by Iran’s leaders during the subsequent four years.

A complementary report was published in 2013 following the election of Hassan Rouhani, the current president who was reputed to be more moderate than Ahmadinejad, and another was released after the conclusion of the nuclear deal in 2015.

The 2013 report noted that threats to destroy another country are prohibited under international law:

The 1948 Genocide Convention lists incitement to commit genocide as a war crime. Much of the Iranian language regarding Israel can certainly be legally defined this way.

A common motif of incitement to genocide is the dehumanization of the target population. The Nazi weekly Der Stürmer portrayed Jews as parasites and locusts. In the early 1990s in Rwanda, Hutu propaganda described the Tutsis as “cockroaches.” Before Saddam Hussein’s operations against the Iraqi Shia population in 1991, his Baath Party newspaper characterized them as “monkey-faced people.” Similarly, former President Ahmadinejad has called Israeli Jews “cattle,” “blood-thirsty barbarians,” and “criminals,” while Iranian state-owned websites have explained why the destruction of Israel and the slaughter of its population would be justified. Dehumanization has also appeared in other forms, such as demonization, in which the target population is labeled “Satanic” – a theme repeatedly used by Iranian leaders to describe Israel.

In fact, according to Prof. Gregory Gordon, who served as a legal officer for the first post-Nuremberg prosecutions for incitement to genocide at the International Criminal Tribunal for Rwanda, Iranian calls for Israel to be wiped off the map are “even more direct than much of the language from the Rwandan cases.”

Remember: #Obama made a nuclear deal with #Iran despite ALL THESE THREATS AGAINST THE U.S. https://lnkd.in/baziShr