The Senate Judiciary Committee sent a letter to Attorney General Jeff Sessions this past week asking for an investigation into a number of Democrats including Hillary Clinton. ABC News says that Hillary lost the election and, therefore, should not be investigated.

That must be a new legal guideline. If they lose, they get away with whatever crimes they may have committed?

This is like saying a bank robber spent all the loot so there’s no point investigating or prosecuting. 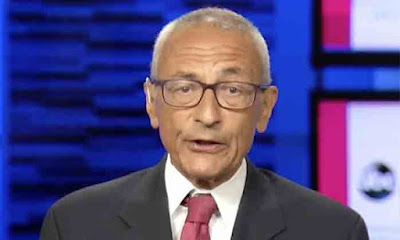 Republicans are the bad guys.

ABC made sure to mention the Russia probe, the fact that some Democrats have appeared before committees already, and that the investigations are GOP led.

Deep into the article, they went lightly into the unmasking accusations but made mention of Devin Nunes, who has uncovered the unmasking, having stepped back from the Russia probe.

Also included was a video interview of John Podesta, Hillary’s chief propagandist and a close associate of George Soros. He spent his time in the interview ripping apart Trump. He portrayed the President as chaotic and undisciplined while dissing the Congress.

What a sleaze, this Podestà is!

She hasn't suffered at all, so nowhere near enough, anymore than you have, Mr. Possesseda, ...yet.

He has it backwards, it is the winners that get the prize of immunity.

The losers get torn down and harried to death by the system.

To the winner goes the spoils, the loser enmeshed in its toils.

The only way a Hillary investigation into her many crimes and seditious actions can end is if she hits the bucket.

Would it be OK if I cross-posted this article to WriterBeat.com? There is no fee; I’m simply trying to add more content diversity for our community and I enjoyed reading your work. jI’ll be sure to give you complete credit as the author. If “OK” please let me know via email.