Media Matters is a "non-partisan non-profit" that started attacking Republicans and conservatives on the first day of its existence and has never stopped since. 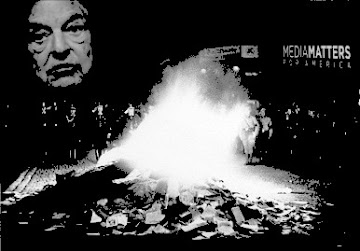 Funded by the progressive-Communist movement and its proxies -- including George Soros and John Podesta -- its sole mission appears to be to shut down political debate using the online equivalents of Nazi and Soviet tactics.

Author and commentator Jeffrey Lord was terminated earlier today by CNN for calling Media Matters what they are: fascists.

Lord mockingly used the Nazi salute to highlight Media Matters' totalitarian agenda. And he's right. Media Matters isn't about free speech, or policy debates, or anything else resembling a dialogue conducive to a healthy society. It is a non-stop attack machine designed for one purpose: to silence opposition voices.

Media Matters is nothing less than a group of online book-burners. Its ideas can't survive in the marketplace of ideas, and therefore it has engaged in nonstop warfare against political speech with which it disagrees, just like Nazi Germany:

• Its unvarnished support for "The Fairness Doctrine", which it intended to wield as a weapon to end conservative talk radio;

• Its attempts to silence Sean Hannity through boycotts of his advertisers;

• Its successful battle against Bill O'Reilly, shutting down the popular Fox News host;

• Its ceaseless attacks on Rush Limbaugh, including a failed boycott campaign;

So losing Lord is likely a penultimate step on CNN's journey to complete irrelevance.

To his credit talk show superstar Mark Levin has not only called out Media Matters by name, but he has dared them to organize a boycott. Levin is prepared to wage all-out war on anyone attempting such a campaign by asserting "tortious interference" and non-stop depositions of everyone involved in this fascist front group.

I would love to see these Communist fascist totalitarians try to take on Levin. Tell you what: popcorn's on me if they do.