GLAD WE’RE NOT IN DEBT OR ANYTHING: Illegal Aliens Only Cost Taxpayers $8,000 a Year Apiece


Say, for all those who complain about people not having enough money for healthcare, what would $116 billion do?

The swelling population of illegal immigrants and their kids is costing American taxpayers $135 billion a year, the highest ever, driven by free medical care, education and a huge law enforcement bill, according to the the most authoritative report on the issue yet.

And despite claims from pro-illegal immigration advocates that the aliens pay significant off-setting taxes back to federal, state and local treasuries, the Federation for American Immigration Reform report tallied just $19 billion, making the final hit to taxpayers about $116 billion. 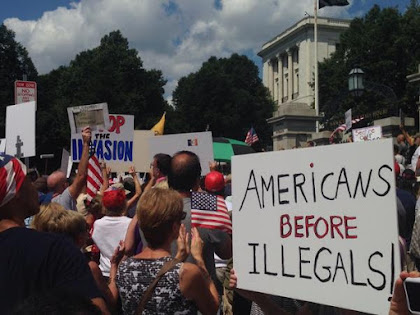 State and local governments are getting ravaged by the costs, at over $88 billion. The federal government, by comparison, is getting off easy at $45 billion in costs for illegals.

Let’s break it down further:

Over 68 often shocking pages, FAIR documents the average $8,075 in state, local and federal spending for each of the of 12.5 million illegal immigrants and their 4.2 million citizen children.

Think about that: another $8,075 not spent on each illegal to funnel to 16.7 million Americans to help them pay the high Obamacare deductibles that make Ocare virtually unusable.

“The United States recoups only about 14 percent of the amount expended annually on illegal aliens. If the same jobs held by illegal aliens were filled by legal workers, at the prevailing market wage, it may safely be presumed that federal, state and local governments would receive higher tax payments,” said FAIR.

It doesn’t matter for most supporters of illegal aliens, because they are looking for new Democratic Party voters, and especially ones who will be reliant of Los Federales for everything, making them beholden to the Government.