FROM RUSSIA WITH FUNDS: Well, It Seems That Hillary Accepted Bribes to Sell America’s Uranium to Russia

Hillary Clinton is demanding to know the truth about Trump and Russia. The truth is that every accusation about Russian ties that Hillary and her associates have hurled at President Trump is really true of the Clintons.

In ’14, Hillary Clinton made headlines by comparing Russia’s Vladimir Putin to Hitler. But if the Russian strongman really was ‘Hitler’, what did that make stooges like Hillary, Bill and Barack Obama?

Five years earlier, Hillary had been posing with a ‘Reset Button” with one of Putin’s henchmen. But Hillary was bringing a lot more to the meeting than a mislabeled button pilfered from a swimming pool. The ‘Reset’ had the same pattern as other Clinton scandals: a shadowy foreign financial pal with an agenda, the Clinton Foundation being used to launder money and a massive government cover-up.

Officially, the ‘Reset’ was pushing Obama’s nuclear arms reduction plan and a joint effort to address Iran’s nuclear program. But the nuclear materials that truly interested Hillary Clinton weren’t in Russian missiles or in Iranian reactors, but in the ground in Kazakhstan. By the time Hillary showed off the ‘Reset Button’, the Clintons had been enjoying a long relationship with Frank Giustra, a Canadian mining mogul. Giustra had moved tens of millions into Clintonworld and Bill built up his profile in Kazakhstan. 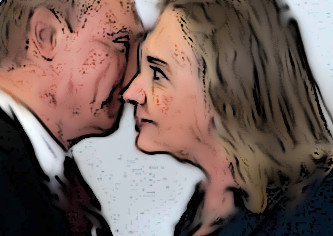 But by ’09, the Clintons had a lot more to trade on than a Senate seat and ex-presidential prestige.

When Secretary of State Clinton unveiled the ‘Reset’, the unspoken truths outnumbered the spoken platitudes. Some of the unspoken truths were obvious. Hillary Clinton and Obama would break with Bush’s criticisms of human rights in Russia. From now on, they would have nothing to say about it.

The man who allegedly agreed to that dirty deal was Michael McFaul who is currently bashing President Trump for being “soft” on Putin.

But the bigger unspoken truth was that Giustra’s company had been bought by Uranium One. And the Russians were sniffing around Kazakhstan. Either the Russians would get Uranium One. Or they would expose the dubious ways that Uranium One had gotten its Kazakhstan mining rights. But if Rosatom, a Russian government corporation, bought into Uranium One, it would need approval from State because such a deal would provide Russia with control over more than 20% of America’s Uranium supply.

Good thing, Uranium One and Putin had a friend in Hillary Clinton. And not just Hillary.

Uranium One and Rosatom didn’t just need the State Department. They also needed the Justice Department to turn a blind eye. And they got that too from Attorney General Eric Holder.

The same year that Hillary brought over her ‘Reset Button’, the FBI was investigating a top Rosatom figure in America for racketeering, extortion, bribery and money laundering. The investigation was supervised by the controversial current Deputy FBI Director Andrew McCabe who has his own financial ties to the Clintons. The investigation dragged out for five years. Just enough time for the Rosatom deal to be approved. When the charges were brought in ’14, the Russians had gotten it all. And the charges were a whitewash that ignored the most damning accusations. Especially those involving the Clintons.

Holder’s DOJ, like Hillary’s State, signed off on the Rosatom-Uranium One deal despite the ongoing investigation. Holder and his associates at the DOJ kept the investigation under their hats. The trails leading to the Clintons were closed off. And the nails were hammered in hard to keep them closed.

“Victim 1”, the FBI’s confidential witness in the case, was an American businessman who was making payments to a Rosatom figure. He knew firsthand about the Russian efforts to influence Bill and Hillary, and through them, the Obama administration, but wasn’t allowed to talk about it. Instead Obama’s DOJ threatened him with criminal charges if he revealed what he knew. And what he knew included comments by FBI agents about political pressure from the DOJ during the Uranium One-Rosatom approval process.

Meanwhile, during the approval process, Bill Clinton was getting paid $500,000 by a Russian bank with Russian government ties, even as his wife had the power to block a deal by Rosatom. While Clinton and Obama cronies are scurrying around to tie Trump to Russia, their own bosses were giving a Russian state corporation whose branches included the nuclear weapons complex access to our nuclear materials.

And Rosatom is also involved in Iran’s nuclear program. The same program that Clinton and Obama cronies are desperately fighting to save by preserving Obama’s blank check for Iran’s nukes.

Not only did Obama and his people at the DOJ and FBI turn a blind eye to Russian nuclear malfeasance in America, but they covered up evidence tying that malfeasance to the Clintons, and then threatened an informant to protect that cover-up. Democracy really does die in darkness. Just ask the media.

The Senate Judiciary Committee is demanding information from ten federal agencies. And, as usual, the Clinton and Obama loyalists embedded there will obstruct and subvert any effort to learn the truth.

Fast forward to ‘14. The Russians had taken complete control of Uranium One a year earlier. By the end of ’13, the fiction that Uranium One was anything other than Rosatom had ended. And with the approval of the Committee on Foreign Investment in the United States, the Russians no longer needed the Clintons. And so the Reset Button was pushed again. And Hillary’s old sugar daddy was now Hitler.

Charges were finally brought in the Rosatom case. Though these charges carefully avoided the crucial deal period. And Hillary was finally free to denounce Putin now that the money wasn’t coming in.

Once Hillary lost the election, her operatives cobbled together the myth that blamed her defeat on a Russian influence operation that had had actually targeted viewpoints across the political spectrum.

But Hillary knew better than anyone how easy it was for the Russians to influence Americans.

The millions flowing to the Clinton Foundation bought not just silence, but complicity. And by corrupting the Clintons, the Russians had also managed to corrupt multiple levels and figures within the government. Including the Justice Department and senior leadership within the FBI.

"The capitalists will sell us the rope with which we will hang them," Lenin had once allegedly quipped.

It’s unclear if the capitalists will, but the socialists have certainly proven themselves eager to sell.

Having betrayed American national security in the Rosatom deal, the Clintons and their allies are busy accusing President Trump and his associates of their own crimes. They were the ones who took bribes. They were the ones who subverted the Justice Department to protect their Russian ties. They engaged in obstruction of justice to the extent of threatening a witness with criminal charges if he spoke out.

And they did it while nuking American national security in order to satisfy their own shameless greed.

What did Obama get out of this deal? He was no friend of the Clintons, but he gave Holder the 'go ahead' to play along. Why? Because he knew Hillary would be the default Democrat candidate to succeed him? Clearly Obama didn't give 2 shits about the Democrat Party's future. So what did Obama get? Somewhere there must be a secret bank account the Obama''s have access to.

After all that time when Hillary really couldn't give a great answer as to why she should be president, now we know they why. She needed to get the reins of power to hide all the corruption of both the previous administration and her own.