A WALL IS NOT ENOUGH: Here’s How to Really Solve Illegal Immigration

President Donald Trump held talks with leaders of both political parties on Tuesday to discuss a major agenda item for this year: immigration.

This issue, specifically illegal immigration, is one that Trump has devoted great energy to since the early days of his campaign. And it’s one conservatives must make a top priority this year.

We’ve made some important strides in this area. 2017 saw border crossings fall to their lowest level since 1971, thanks to the Trump administration’s policies. But there are still hundreds of thousands of illegal immigrants trying to cross into the U.S.

There are also hundreds of thousands of visitors to the U.S. who continue overstay their visas. So it’s worth considering, at the outset of 2018, how to solve this problem.

It’s clear that the U.S. can make improvements at its borders to stop additional illegal immigration. These include adding physical barriers where they would be effective, improved technology to monitor the border, and ensuring that we have appropriately equipped border patrol agents watching our border. 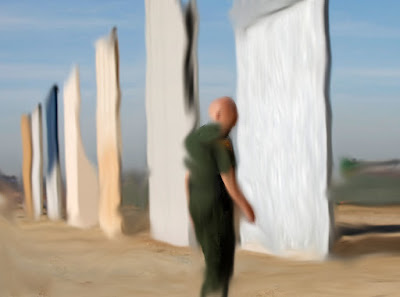 This holistic approach of combining barriers, technology, and people is the cost-effective way to secure the border. Build “the wall” is not enough.

Congress and the administration could build a large wall on a mountain in the middle of a desert in New Mexico, but that would not be the best use of limited security dollars. The mountainous terrain already acts as a natural wall that prevents border crossing.

Furthermore, a wall in a remote desert would barely slow down illegal immigrants. It would only take them a few minutes to get over the wall, but after that it would take them hours to reach the nearest town or road—the proverbial speedbump in the desert.

Instead, our tax money would be better spent on technology or additional agents would could respond to and detect illegal crossings.

This is what White House Chief of Staff John Kelly, Homeland Security Secretary Kirstjen Nielson, and many of the pro-enforcement policy community thinks is the best way to secure our border.

But let’s step back. Is better border security even the main way to stop illegal immigration?

It is certainly a piece of puzzle. The more important piece, however, is the enforcement of U.S. immigration law within the country.

Furthermore, border security does nothing to help stop visa overstays. Only interior enforcement can do that.

Already, the president and members of Congress are considering changes to our immigration policy. If they truly want to stop illegal immigration, some good places to start would be: expanding the number of ICE officers, pushing back on sanctuary cities, expediting deportations, and increasing the efficiency and number of immigration courts.

These measures, coupled with improved and cost-effective border security, would go a long way to solving our illegal immigration problem. It’s hard to imagine a better resolution for 2018.

"Instead, our tax money would be better spent on technology or additional agents would could respond to and detect illegal crossings"

No, just enforce current laws including criminal charges against the people that knowingly hire illegals.

I'd add a minefield. Buzzards have to eat too, you know.

Do away with 'immigration courts'. There's no defense if you are in a country illegally. If you're legitimately seeking asylum you must turn yourself in at the first opportunity and make a formal request. Visa over-stays should be relentlessly hunted down and deported as soon as apprehended. End birthright citizenship (anchor babies) and chain migration. Enforce severe punishment for anyone who employs an illegal and bar illegals from obtaining driver's licenses or financial assistance.

I don't care. I want the wall. And men to man it were have enough money for both. We'll have giant savings in Medicare alone to say nothing of prisons and law enforcement.