GENIUS: Democrats declare war on their base (and the rest of America) #SchumerShutdown

So the Democrats have succeeded in shutting down the government, thanks to a 60-vote threshold required to approve a continuing resolution.

Now, you and I know that, but Democrats on Twitter are apparently still unable to do simple math.

Republicans didn’t care about Democratic votes when they wanted to repeal Obamacare, cut taxes for the rich, or confirm Neil Gorsuch for a stolen Supreme Court seat.

The GOP controls all 3 branches of government. Any #GovtShutdown is their fault alone.

The brilliant mathematician Keith Boykin, if that is his real name, is unable to evaluate the expression 51 < 60.

See the number of retweets? This is what passes for informed commentary on the increasingly unhinged left.

The Democrat Party Declares War On its Own Base

Consider: the massive, unaccountable and unfireable fourth branch of government -- the federal bureaucracy and administrative state -- is indistinguishable from the Democrat Party. 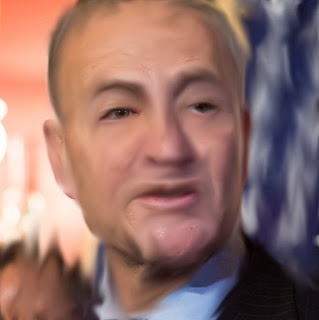 And because the #SchumerShutdown furloughs all non-essential government workers, it's safe to say that many federal employees are pissed off. At Democrats.

So why did Democrats decide to flip off their own base?

Suffice it to say that the Senate minority leader -- Chuck Schumer -- has never held a real job in his life, as far as I'm aware.

Because he lives in his little bubble of wealth and incentivized incompetence, he's never had to make a serious decision in his life.

Schumer's never had to face a serious negotiator like Donald Trump, who's been involved in deals so complex it would make your head spin.

Under Schumer's "leadership", the Democrat Party has officially decided to prioritize a million or so illegal aliens over: (a) its base; (b) the American military; and (c) childrens' health care.

I hope the Democrats keep the government shut down for months. It ought to work wonders for the midterms.

The leftist commentary is so ridiculous. The don't have two brain cells to rub together. It's all falling around their ears and they are still spouting their propaganda and lies and excuses - hoping their brain dead "followers" will believe them. I never thought I'd see the likes of this insanity. But, that's exactly what it is. Pure, unhinged, insanity. Now,
RELEASE THE MEMO and let's rid our America the Beautiful of these seditious traitors. They (Obama, Killary, Comey, Lynch, Koskinen, Mueller) and all those who have participated in the coup to take Trump down. And, let's not forget the complicit democrat propaganda media - they should be boycotted, banned and ignored. They are a disgrace. America must come through this intact and forge ahead to being the exceptional country that she is. Those that want to kill her and harm her, should be shot, hung, in prison. No other solution is acceptable.

ROFL Thanks for the chuckle.

Schumer is willing to take the heat for this because he knows if he can guilt our side just one more time, into an amnesty, that's the old ball game. Once legalized, these millions will bring in more millions and they will vote 80%+ dem.

So bet your ass, Schumer will screw anyone, even their former most loyal constituency, blacks, to get over this hump. He knows it's all downhill after that. Forever.

I am commenting here specifically about President Trump's new campaign ad about the government shutdown titled 'Complicity' in which he CORRECTLY TIES DEMOCRATS TO HORRIFIC CRIMES COMMITTED BY ILLEGALS.
https://www.youtube.com/watch?v=U-nm0vQwO5c

The ad starts off by showing Sacramento Cop-Killer Luis Enrique Monroy-Bracamonte AKA Marcelo Marquez AKA Julian Beltran, an illegal alien, a drug cartel member, and a convicted drug dealer who was deported twice!

But as Katie Pavlich noted in 2014, "[T]hanks to the Obama administration's new selective deportation guidelines and refusals by local agencies to comply with federal immigration laws, he's been able to stick around since the last time he got into legal trouble."
https://townhall.com/tipsheet/katiepavlich/2014/10/27/sheriffs-deputy-murdered-by-illegal-alien-who-was-deported-twice-n1910485

CTH noted then this monster's "rampage included shooting three police officers, killing two –- and shooting another civilian in the head during a botched carjacking."
https://theconservativetreehouse.com/2014/10/25/confirmed-the-sacramento-murderer-is-a-known-illegal-alien-cartel-member-convicted-drug-dealer-and-was-deported-twice/

Pictured in the ad: Deputy Sheriff Danny Oliver
End of Watch: Friday, October 24, 2014. Deputy Oliver had served with the Sacramento County Sheriff’s Department for 15 years. He is survived by his wife and two daughters.
http://www.odmp.org/officer/22251-deputy-sheriff-danny-paul-oliver

Pictured in the ad: Investigator Michael David Davis, Jr.
End of Watch: Friday, October 24, 2014. Investigator Davis had served with the Placer County Sheriff’s Department for 15 years. He is survived by his wife and four children.
http://www.odmp.org/officer/22252-detective-michael-david-davis-jr

And this "Hands up don't shoot" MSM and OFA-propagated LIE had further deadly consequences when weeks later, on Saturday, December 20, 2014, assassin Ismaaiyl Abdullah Brinsley cited it before brutally executing NYPD officers Wenjian Liu and Rafael Ramos, this occurring THE SAME WEEK that Barack Obama was meeting with "reverend" Al Sharpton at the White House as Sharpton's protesters in New York City chanted they wanted "dead cops." Reminder: When 2014 came to a close, as our nation was mourning the two ambushed NYPD officers, Obama BLEW OFF attending their Memorial because he was vacationing in Hawaii.

You can see I know of these crimes -- I IMMEDIATELY recognized in the 'Complicity' ad this Sacramento cop-killing perp -- because I am among the many who are aware of the DISTURBING RECORD that Barack Obama has on protecting "blue lives"!

At the federal agency I work at, the civil servants look forward to shutdowns because they know they'll get paid eventually. So it's basically a surprise paid vacation for them. In 2013 they paid us contractors also, but it was less certain.