THE OBAMA FBI: They’re With Her

The senior FBI figure, who had participated in the Hillary email investigation, interviewed Flynn and had been part of Team Mueller, wasn't looking to State Farm for his insurance needs.

Chatting with his mistress, an FBI lawyer who worked for Deputy FBI Director Andrew McCabe, Strzok worried that Trump might win. “I want to believe the path you threw out for consideration in Andy’s office — that there’s no way [Trump] gets elected — but I’m afraid we can’t take that risk,” he wrote.

It was the summer of an election year. The official odds all favored Hillary. But a failed FISA request had already been made. And the real insurance was still coming. Its policies would include a second successful FISA request, the Steele dossier, the mass unmasking of Trump officials and the Mueller witch hunt. The insurance still hasn’t paid off, but the men and women behind the coup are betting that it will. 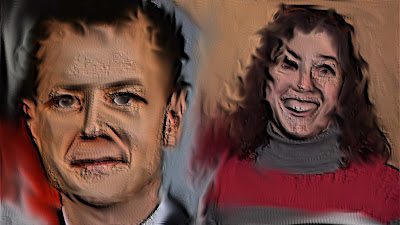 By the time October rolled around, the cost of the insurance was still rising. In late October, as Election Day was coming up, Strzok and Page were looking over their own leaks to the media. They discussed the stories in the Wall Street Journal and the Washington Post that they had allegedly helped shape.

Leaking, not football, is the supreme sport of our nation’s capital. Sabotage and self-promotion are the two reasons that government types leak. And this was clearly sabotage. Election Day was coming up and a top investigation figure was seeding damaging stories about President Trump through the media.

"Article is out, but hidden behind paywall so can't read it," Strzok's mistress texted him.

The team wasn’t aware of what Strzok was up to. And he didn’t want them to find out. Like other anti-Trump operatives, Strzok was playing a complicated double game. He was pretending to conduct fair investigations of Hillary Clinton and Donald Trump, even as he wanted her to win and him to lose.

Negative pre-election stories coming from inside the government were one way to do it. The media’s practice of anonymous sources allowed Strzok to hurt Trump without exposing his own biases.

Hillary Clinton would later blame the FBI for her defeat. But it was her own allies inside the FBI who were feeding negative material to the media about Trump to allegedly help her win the election.

The Hillary campaign’s allies in the FBI and the DOJ were the most potent and vulnerable.

The media operations that Strzok was allegedly interfacing with were solid Hillary territory. Reporters, pundits and talking heads could write anything about Trump. But law enforcement had standards. And an obviously biased investigation would reduce the credibility of Strzok to the level of his media allies.

The texts peel back more of the shadow war against Trump. The media coverage of the fake investigation was shaped by activists like Strzok. The public only saw the final product on CNN. Only now is it getting a sense of how that message was manufactured and distributed in the shadows.

The Steele dossier that would allegedly feed into the second FISA request and the Mueller investigation had not been made public, until BuzzFeed foolishly published it for clicks, and discredited it. Instead it was circulated in closed circles. It was passed around the FBI and peddled to media organizations. But its allegations were too raw and too improbable to actually see the light of day. Like Steele, Strzok was feeding raw material to the media. And it was the media’s job to make it appear more plausible.

Peter Strzok hadn’t been sure Trump would lose back in the warm days of summer. The cool winds of fall were now rustling the falling leaves on lawns across the bedroom communities of Washington D.C. No matter what unbeatable odds the media was giving Hillary, he knew better. FBI officials spend more time outside the progressive bubble than reporters. Unlike his media contacts, Strzok could see past the Acela corridor. And he was good enough at his job to see the improbable and the impossible coming.

Leaking to the media was one form of insurance. Negative stories orchestrated by Hillary and Obama loyalists within law enforcement might hurt Trump. Maybe they would even sway the election.

Probably not, but Strzok was getting in all the insurance he could. If Trump couldn’t be stopped on Election Day, something like the Mueller investigation would be needed to kneecap him.

But for now, Strzok and Page were obsessed with the media. They pored over news stories. They searched for contacts. They rated and evaluated reporters. These were strange habits for two FBI figures, but when Strzok and Page unofficially joined Team Hillary, they crossed the line between law enforcement and politics. And they had begun acting like staffers on a political campaign.

"Makes me feel WAY less bad about throwing him under the bus to the forthcoming CF article," Page texted Strzok. Investigators are still trying to figure out who was being thrown under the bus and what the article is. But it was chatter typical of the staffers working for a politician in Washington D.C.

Ten thousand messages like these are exchanged every day between staffers in House and Senate offices. Strzok and Page weren’t supposed to be planting hit pieces in the media, but the politicization of the FBI and the DOJ had corrupted them. Instead of searching for the truth, they were working for Hillary Clinton. And their texts, nasty and media obsessed, read like spillover from the Clinton campaign.

It was insurance against a Trump win. But it also fed their sense of importance. They weren’t just cogs in a law enforcement machine. Instead they were helping determine the outcome of an election.

If the hit pieces worked, Trump might lose. And if he survived them, then the investigation would go on.

Strzok and Page were part of a larger Washington D.C. establishment. Its members might work for the Washington Post, the EPA, and the FBI or for one of the big law firms, but they were all living in the same swamp. And they shared a common view of Trump as a threat to their way of doing business.

The leaks were the swamp’s way of doing business. Hit pieces were its insurance policy against change.

But every action has an equal and opposite reaction.

The Fusion GPS story has told us a great deal about what goes on behind the scenes in the media. The Strzok and Page texts are a window into how the big government swamp was dealing with Trump.

So America is confronted with another Julius and Ethel Rosenberg.
They need to meet the same fate, let's get it done.

I recall an episode from an old TV show (2001) about a private detective 'Nero Wolfe' who took a case of a woman who was being harassed by the FBI. Her only 'crime' was being an outspoken critic of the FBI. Wolfe warned his associate that their phones would surely be tapped and that he shouldn't say anything that he wouldn't want to see printed in the New York Times.

I'm ready for some serious prosecutions!! It's been decades in the making.