I must highlight some key graphs from historian Victor Davis Hanson's latest missive. It is masterful, outlining several important notions.

First, that the Never Trump Republicans must increasingly deal with administration policies that are far more conservative than anything they could have hoped for from their preferred losers candidates like ¡Yeb!.

Second, and more importantly, that the Donald is actually unwinding the massive administrative state ("the fourth branch of government", as described by Mark Levin) that has grown inexorably like a tumor on the body politic for well nigh a century. 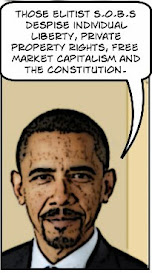 The wonder was never how to grow the economy at 3 percent (all presidents prior to 2009 had at one time or another done just that), but rather, contrary to “expert” economic opinion, how to discover ways to prevent that organic occurrence.

Obama was the first modern president who apparently figured out how. It took the efforts of a 24/7 redistributionist agenda of tax increases, federalizing health care, massive new debt, layers of more regulation, zero-interest rates, neo-socialist regulatory appointments, expansionary eligibility for entitlements, and constant anti-free-market jawboning that created a psychological atmosphere conducive to real retrenchment, mental holding patterns, and legitimate fears over discernable success. Obama weaponized federal agencies including the IRS, DOJ, and EPA in such a manner as to worry anyone successful, prominent, and conservative enough to come under the federal radar of a vindictive Lois Lerner, Eric Holder, or a FISA court.

Hanson notes that the current, unprecedented burst in consumer and small business confidence is the natural result of unwinding policies that were intended to quash American entrepreneuers.

...one way of understanding Trump — particularly the momentum of his first year — is through recollection of the last eight years of the Obama administration. In reductionist terms, Trump is the un-Obama. Surprisingly, that is saying quite a lot more than simple reductive negativism. Republicans have not seriously attempted to roll back the administrative state since Reagan. On key issues of climate change, entitlements, illegal immigration, government spending, and globalization, it was sometimes hard to distinguish a Bush initiative from a Clinton policy or a McCain bill from a Biden proposal. There was often a reluctant acceptance of the seemingly inevitable march to the European-style socialist administrative state.

On the foreign policy front, Trump has proven a resolute change agent. From unleashing American might to crush ISIS to exerting "big button" diplomacy on North Korea, the results are the complete oppposite of the Obama doctrine of (yes, it's too easy) leading from behind.

One would have thought that all Republican presidents and presidential candidate would be something like the antitheses to progressivism. In truth, few really were. So given the lateness of the national hour, a President Nobama could prove to be quite a change.

Mark Levin called it in 2017, stating that Donald Trump is the "most conservative president since Ronald Reagan".

The 45th president is reversing Obama's Marxist policies at a rate not seen since Reagan. Or Coolidge, if you prefer.

The nevertrumpers burned themselves, revealing that they were not conservatives at all. They were, are and will remain forevermore, nothing but GOP Elites; scourge of true conservatives.

Remember: Bonuses are a one-time hit on budget...a raise lasts as long as the employee/company lasts...and, it is a better signal of a healthy economy and/or corporate optimism. And, of course, the firms wouldn't have done it if they didn't think they could recover that expense *and more* in a rising economy -- that's just good business sense ;-)