Rush’s Amazing Answer to a 13-Year-Old: Why Becoming an American Shouldn’t Be Easy

RUSH: We have from Ohio, I guess it’s Delia, and she is 13 years old. Hi, Delia. Welcome to our program.

CALLER: Hi, Mr. Limbaugh. Thank you for having me.

CALLER: So I attend a Catholic school in Strongsville, Ohio, and every Friday we have a current event topic, and we pick a side, and we debate about it. It usually ends up being political. So this week our topic is whether or not it should be easier for immigrants to become U.S. citizens. And I was looking through any website I could to find credible information. But it seemed helpless because the only things I could find were opinionated essays from CNN from 2010. So I was wondering if you could help me with this problem?

RUSH: Well, I could tell you what I think about your question. Could I ask you a question first?

CALLER: I knew that was gonna come up. I’m sick today.

RUSH: Ah, I didn’t get away with that very much. I tried. Well, I hope you’re not too sick. You sound good.

CALLER: Yeah. I’ve been sick for about a month. I’ve still been going to school, but today was just really bad.

RUSH: But you are gonna go tomorrow and you’re gonna participate in the question?

RUSH: Have you been given a side to take in this, or can you take any side you want based on what you really think? Or are you supposed to research this and find out somebody else’s opinion? What is your assignment here, if there is one? 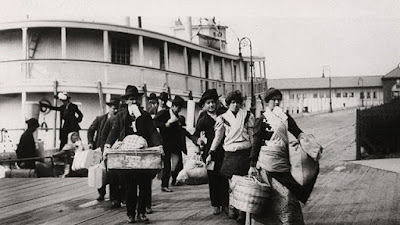 RUSH: Well, in researching — this is a problem, I think, with the internet in general, is finding untainted, you know, just straight objective news. Now, one of the places I would suggest — and I don’t have the web address, but you might try U.S. government websites looking for data on immigration and citizenship just to find out what the numbers are — and we’re talking legal here — how many people are admitted into the country in an average annual basis and what do they have to do to become citizens. Are there visas involved, can they come here for a few years in advance of citizenship, and, if so, on what kind of visas?

It can get pretty complicated. I can give you the overall theory of immigration that has always governed the subject in the United States. And, in a nutshell, when you attach the question, “Should it be difficult to become a citizen,” yeah, it should be. And it’s not overly hard as it is now, but it should require some commitment, because the United States — and this is probably what you’re gonna have trouble finding on the web. I’m giving you opinion, but it really isn’t. It’s opinion based on my knowledge of the founding of the country and how the country was intended to be and what it became. And there’s no other country like this in the world.

Most people, Delia, even today, most people alive today live under some form of dictatorship or tyranny and have nowhere near the freedoms that we in the United States have. They don’t have anywhere near economic freedom and liberty or prosperity that we have, which is why we’re such a targeted destination for people. We stand out.

And it’s precisely because this country was founded on the basis that human freedom and human liberty and the human mind unfettered lead to exceptionalism and greatness. Not that we’re better than any other people on the earth, but because we have fewer restraints and restrictions on us, that we are freer to reach our potential as individuals and as a population.

Well, this led to the establishment of a distinct American culture. And, by culture, I mean, rules and regulations and morality by which the citizens of America live. And this culture was itself rooted in the premise of individual liberty where you could pursue happiness while living your life unafraid of what you think, unafraid of what you say, unafraid of where you go because your government does not have the power to penalize you for it.

So this kind of unshackling of the human being led to untold innovation and progress, economic prosperity. And our population growth — we purchased Louisiana Purchase and won some territories — the population growth of this country coupled with that unique, never before seen in the world freedom and liberty unleashed a population like the world had never seen.

Nations had been around for thousands of years, say in Europe or the Middle East. We, in less than 200 years, had eclipsed them by a factor of 10 in just basic standard of living circumstances. Simple things, like plumbing, sanitation, water, inventions such as air-conditioning and flight and electricity and so forth, leading the world in all kinds of innovation, led to untold millions of people wanting to come here.

In order to preserve this country, it ought to be a very specific task for somebody, not a citizen, to become one. If they come here via legal immigration, they do have to take a test. And those who endeavor to become citizens and pass the test, it’s one of the most proud days of their lives. If you’ve ever been to a naturalization ceremony or ever seen one televised, it’s one of the proudest days of their lives, to become, quote, unquote, an American.

They learn the language. They become familiar with the customs. They do not sacrifice their nationality. If they arrive here as Italians, they’re still Italians, Italian Americans, but they become Americans. It’s a good thing to become an American, to be a participant in this unique, distinct culture.

Well, what’s happening is that that unique, distinct culture is being diluted and watered down by record numbers of illegal immigrants who want to become citizens but do not want to have to do anything required to become a citizen other than show up. And that’s why so many of us feel the country is at risk and threatened.

We are a nation with a culture and a society worth preserving as hard as it takes, as long as it takes, as much as it takes to preserve it. And we are under assault. There are people who think that our society is exclusionary, it’s unfair, it discriminates. And all of that is literally a bunch of caca. We have in the past had problems. No nation on earth has done more to address discrimination, injustice, and it’s an ongoing thing that the people of this country engage in each and every day while being accused of being racists, sexists, bigots, and homophobes.

But I’m drifting away here.

The bottom line is that America is so valuable to the world, America is so important, preserving the culture that led to this exceptionalism is worth preserving, and it ought to be hard. It ought to take some effort to become an American. If you have grown up and you’ve not been educated, you want to come here, you want to become a citizen, you need to learn what it takes.

People born here grow into it and that birthright, if you’re born here you’re a citizen so you don’t have to take any tests, you just grow up and hopefully you become an American. But we’re in charge. Every nation should be in charge of who gets in and who doesn’t. Every nation should have the ultimate right to determine who gets in and becomes a citizen and who doesn’t. There’s nothing discriminatory about that. There’s nothing unfair about that. It’s necessary to preserve the country as is. That’s why we have borders and so forth.

So the short answer to the question is, yeah, it should not be easier to become a citizen. It’s not that hard now. But it takes some level of commitment. You want to see some degree of commitment. In anything. Nothing in life should be easy. Nothing worthwhile is easy, Delia. Everything worthwhile does take some effort, in some cases a lot of it.