The total exoneration of President Trump and his campaign has given his voters a few days of smiles and happy headlines, but not deep satisfaction. The claim that Donald Trump, his family, and his staff were traitors and Russian agents remains a sickening reminder of the corruption of our FBI, Department of Justice, and Barack Obama’s administration. The debasement of our once free press into a state propaganda ministry is an ongoing assault on our country. None of these problems are resolved with the end of Robert Mueller’s witch hunt.

The Russia collusion hoax has left the credibility of our justice system in tatters. We did, in fact, have Russian collusion to affect the outcome of 2016 the election—and it was entirely the handiwork of Hillary Clinton and Barack Obama. Justice requires not only that the innocent are exonerated, but that the guilty are punished. It isn’t going to happen. Justice takes a second seat to politics.

How It Came to Be

It was obvious from the first that Hillary Clinton, via Fusion GPS, was the creative force behind the Russian collusion hoax. The euphemism “dossier” could not disguise what was soon revealed to be a concoction of opposition research lies. Worse, Clinton’s accusations were produced in collusion with Russian agents—“dossier” author and former British spy Christopher Steele relied on old contacts in Moscow to relay unverifiable gossip—in order to discredit the outcome of a presidential election.

As for holding President Obama and his administration responsible for their many criminal actions? I don’t know why journalists write columns raising this possibility when they know it will never happen. 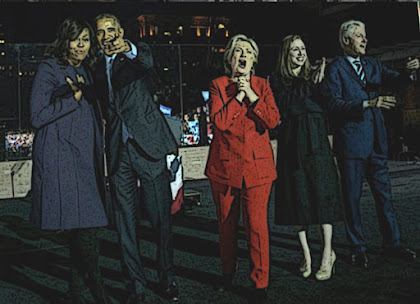 It doesn’t matter who is attorney general when the Justice Department remains packed with Obama loyalists. Senate Majority Leader Mitch McConnell’s slow-walking of Trump appointments for two years has kept the deep state in power. Justice from that quarter seems unlikely. But those aren’t the most important barriers to justice. There will be no special investigator into the Russia hoax.

Talking about uncovering the miscreants behind the hoax is good for clicks and polling. Doing something? Years of further investigations likely would alienate milquetoast suburban moms and the vast majority of blacks. It is not smart politics. Trump needs to peel off some of those voters, and going after Clinton and Obama would be counterproductive to his reelection hopes.

A few high-profile, lower level agents may feel some heat, but not the top dogs. I doubt if the investigation would rise to the level of former Attorney General Loretta Lynch, former U.N. Ambassador Susan Rice, or former Director of National Intelligence James Clapper. All three would get us close to President Obama. No one is going after Obama, ever.

Over and over, Trump’s voters have been told the next investigator would be an honest cop, like Gary Cooper in “High Noon.” This time, Clinton and Obama’s criminal shenanigans would be called to account. Don’t make me laugh.

Does anyone remember how often we were told that former FBI Director James Comey was a bipartisan straight shooter? That Trump’s first attorney general, Jeff Sessions, was loyal and courageous and hated false accusations? We were assured that Justice Department Inspector General Michael Horowitz was the upright man who would expose the fake Clinton investigation and clean house at the FBI. That never happened.

Each time we’ve had to relearn the bitter lesson that America has a two-tiered justice system: one for politically well-connected Democrats and one for the rest of us.

It just happened again, with a Chicago prosecutor letting “Empire” actor Jussie Smollett walk free, ignoring the grand jury findings of probable cause that he faked a hate crime to smear Trump supporters. There was a call to the Cook County attorney from Michelle Obama’s former chief of staff, a $10,000 “contribution” (in the form of a surrendered bail bond) and a clean slate with no trial. The true hate crime is ignored: the lie that Trump supporters are racist, homophobic thugs. That hate gets a free pass, although more than once it has led to violence, including attempted murder. The country is once again damaged by liberal race-baiting, and Democrats are happy.

U.S. Senator Lindsey Graham’s scathing denunciation of Democrats during Brett Kavanaugh’s confirmation hearings rings truer than ever. “Boy, y’all want power. I hope you never get it,” Graham said. “I hope the American people can see through this sham. God, I hate to say it, because these have been my friends. But let me tell you, when it comes to this, you’re looking for a fair process? You came to the wrong town at the wrong time, my friend.”

Those are the political reasons nothing will be done about the Russia hoax.

The second reason is equally ominous for our country—how the Democrats get away with it. We can’t have political accountability without an honest media. Fox News is mostly honest, but it does not reach low-information voters and Democrats. We’ve always had a partisan mainstream media, pretending to be objective. Now they have become outright liars. That is why justice will never be done.

The Clinton-Obama team, including key players in Obama’s inner circle such as Susan Rice and John Brennan, and also the crooked agents and lawyers in the FBI and Justice Department, could not have carried off the Russian collusion hoax to subvert our presidential election without the wholehearted collusion of the American press.

The Russian collusion hoax has been debunked, but the underlying problems remain. Throughout the Obama years, the press willingly transformed itself into a propaganda arm of the Democratic National Committee. They had to hide damning facts about Obama’s career as an American-hating Alinskyite or he would never have been nominated, much less elected.

The press suppressed the video of Obama with anti-Israeli radical Rashid Khalidi. They suppressed the photo of Obama with his arm around Farrakhan. They hid that Obama’s church for 20 years was not only anti-white and anti-Jewish, but also socialist—congregants took a “black value system” pledge against “the Pursuit of Middleclassness.” The press hid candidate Obama cheating in the primary against Hillary Clinton. The media repeated the lie that the Illinois senator was not close to the “radical, Leftist, small ‘c’ communist,” convicted terrorist Bill Ayers. Facts on record showed that Ayers hired Obama for the biggest job of his life, distributing $100 million meant to help Chicago’s schoolchildren, which they siphoned off for radical causes instead.

Protecting Obama’s presidency from scrutiny required ongoing corruption from the press corps. The sins of omission got bigger and more consequential as the Obama presidency wore on. Somewhere along the way, they turned to sins of commission, with the media pushing lies to help Obama get re-elected and free from damaging scandals.

They had to hide the fact that Obama siphoned off $640 million from bank fines and directed the funds to radical groups. They made light of his administration weaponizing the IRS against political opposition. They happily fed into the echo chamber the administration’s lies about the Iran nuclear weapons deal. And, of course, they recycled the administration’s phony talking points about the Benghazi disaster.

Most of all, the press had to push the lie that Obama was a “moderate” and a “racial healer,” despite his cynical incitement of racial division over the corpse of Trayvon Martin and his role in advancing the “hands up, don’t shoot” lie in Ferguson, Missouri. The press supported the lies and set back race relations in this country by many decades.

After nine years of covering up for Obama, it was second nature for the press to push the Obama-Clinton frame-up of Trump as a Russian stooge.

The danger and destruction this propaganda press is visiting upon America cannot be overstated.

Progressive America is free to run amok. They have not been chastised and they will not stop.

It wasn't just Collusion, it was also Red Baiting.
Let's let Hillary explain in her own words why she thought this was a good idea.

If the Federal bureaucrats and politicians who participated in SPYGATE are not prosecuted for their crimes, we are only encouraging similar crimes in the future. These people must be tried in court and GIVEN THE HARSHEST SENTENCES POSSIBLE so that NO American will be willing to take the risk of committing these scandalous acts in the future.

Any idiot can write an article now?