It wouldn't change investor behavior, would it?

It wouldn't inhibit shifts in investment?

Yes and yes. Government incentives that operate in a top-down system without a feedback loop always end up collapsing.

In 1849, the French writer Frédéric Bastiat wrote a popular pamphlet entitled The Law. In it he described:

Sometimes the law defends plunder and participates in it. Thus the beneficiaries are spared the shame and danger that their acts would otherwise involve… But how is this legal plunder to be identified? Quite simply. See if the law takes from some persons what belongs to them and gives it to the other persons to whom it doesn’t belong. See if the law benefits one citizen at the expense of another by doing what the citizen himself cannot do without committing a crime. Then abolish that law without delay - No legal plunder; this is the principle of justice, peace, order, stability, harmony and logic.

Forced redistribution of wealth turns out to be about the worst economic system ever devised.

Taken to its extreme we see command-and-control economies that invariably collapse into mass hunger, and brutality. The Soviet Union, North Korea and Cuba being only a few cases in point. 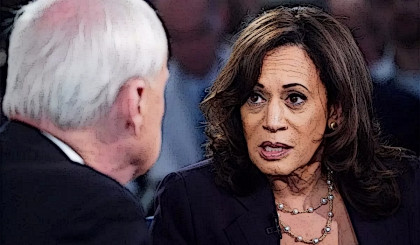 Other examples of wealth redistribution are closer to home, wherein the federal government:

• Intervened in the mortgage loan industry for decades, culminating in the 2008 subprime collapse
• Began subsidizing student loans, resulting in an explosion of tuition costs in higher education
• Interfered in the health insurance business by creating vast, inefficient bureaucracies

The good news is that serious political campaigns -- those of both parties -- are beholden to Wall Street interests. It seems quite a stretch to believe that Goldman Sachs, JP Morgan and the other Masters of the Universe will look kindly on Kamala Harris's proposal.

Wait. Is her real name Kamala or Kommunala?

What do you expect from a pole dancer who graduated to knee pads? The Demorats will destroy America, but the GOP is almost as bad. Trump pushed for releasing violent felons, passed a bill giving pensions for the next 99 years to anyone who wandered by southern Manhattan on 9-11 (this applies to students, vagrants, loiters, not just first responders-another example of the government lying about what their laws will do. Imagine fully funded for the next 99 years-remember this occurred 18 years ago.)

No matter how you spin it, "Medicare for All," is financially untenable.

Bastiat also noted that the purpose of government is to interefere. The single best definition I've ever heard.