THE SUICIDE SQUAD VS. TRUMP: Annnnnnnnnnd... We Have a Winner

Those who portray President Trump as some kind of Vulcan who plans his moves like he plays three-dimensional chess have probably never met my old boss, let alone worked closely with him and seen how he actually makes key decisions.

He’s not a clinical plotter; he’s an instinctual pugilist. Whether it’s negotiating with dangerous dictators in Asia or dangerous Democrats back home, his actions are more Rocky Balboa than Gary Kasparov. And that’s what makes them all the more impressive. Just look at the last few days preceding his Twitter war with the Four Horsewomen of the Democrat Apocalypse.

Last Thursday, President Trump held what may have been one of the most important meetings of his presidency, at least when it comes to his chances of being reelected in 2020. In a bold move, driven in part by the good offices of his masterful social media adviser, Dan Scavino, the president invited 150 of the leading conservative internet influencers to the White House for a social media summit. This was a highly heterogeneous group, all ages, males and females, white, black, brown, yellow, Reaganite to libertarian—this author included—and all linked by one thing: their support for the president’s MAGA agenda and their roles as defined in opposition to the “legacy” media.

And of course, the FakeNews Industrial Complex was not happy, with the New York Times leading the way, lambasting the president’s guests as mere “trolls.”

But the important point is not the unrestrained jealousy of the media or their foul and churlish response to the summit. The point is the timing, the president’s follow-through with the “Squad” last weekend, and the message he was broadcasting through his guests to the majority of Americans who believe in America and the president’s America First agenda. 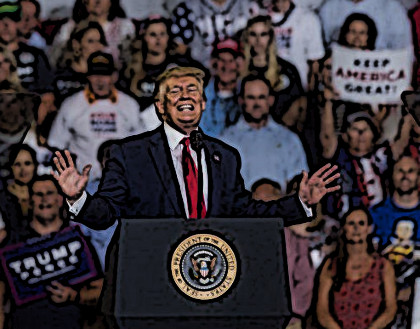 First the message to you and America. If you don’t know what happened at the summit, you can watch our meeting with the President and read the full transcript here. And you really should, because the president was in fine form. It was a meeting about serious issues, curtailment of First Amendment rights, Big Tech censorship, the corruption of the media, but the president was also very funny, direct and candid. And his key message was crucial to 2020. Big Tech is censoring, deplatforming, and demonetizing voices on the Right because they and the leftist media are afraid, as they should be given the depth and breadth of their lies.

President Trump shared with us that the assembled guests in the White House have a combined audience of 500 million followers, bigger than any legacy media platform in the world today—so of course the propagandists worry they are losing their monopoly on information control. But this is exactly why we mustn’t be afraid. The president sent a message of almost biblical tone, in that we must not be afraid because the power is now in our hands, in the hands of what Andrew Breitbart called America’s citizen journalists.

Then there’s the president’s role as the troller-in-chief.

President Trump doesn’t play chess, but he knows how to win. There’s a reason his reality-TV show ran for 14 incredibly successful seasons and only ended because he entered the Oval Office. This weekend, right after the social media summit, he demonstrated his preternatural strategic communications ability when he unleashed a handful of strategic tweets.

Most American who don’t devour politics have no idea who Ilhan Omar is or what Alexandria Ocasio Cortez really believes. But after tweeting out that those who criticize America should go and fix the places where they came from (Somalia and the Bronx?) before they come back and lecture the rest of America was a masterstroke. In the firestorm of a Democrat response which led to articles of impeachment being introduced in the House and Nancy Pelosi bringing a resolution to condemn the president as a racist, the only winner is the president. Let me explain.

I keep hearing that the president’s greatest vulnerability is apolitical suburban housewives who couldn’t tell you who Antonio Gramsci was if their lives depended on it. These are voters who are not aware that the Democrat party has been taken over by extremists who hate America. Well, they do know now. The president’s tweets were the fuse to a signal cannon that has woken up all Americans to the racism, anti-Americanism, and bigoted extremism of the so-called Squad. After Sunday there is no way to hide AOC’s reprehensible concentration camp comments from the widest audience possible, or Ihlan Omar’s belittling of the 9/11 attacks, or Rashida Tlaib’s anti-Semitism, or even Ayanna Pressley’s racism.

And incredibly, the president did all this while managing to trigger Pelosi to embrace the squad, making her break all the congressional rules on decorum, triggering the presiding black Democrat to drop his gavel and walk out in disgust. The subsequent impeachment vote saw 137 Democrats jump ship and vote against the resolution. All this after more than a year of screams for Trump’s impeachment from the Democrats. If you ever doubted the power of social media—or the president’s unmitigated fluency in its use—doubt no more.

We may have more than 470 days to go until the election, but not one of those days will be a day during which the true face of the Democratic Party can be denied any longer.

It's actually hilarious how scared the left and their buddies of the MSM really are, they know they're losing the messaging they've controlled for 50+ years. The right must fight back as hard as the left has fought for many many years.
Donald Trump is the reason for their terror ! I love it !

They are scared because they know that when the truth comes out as to what they've been up to they will have no place to hide, no where on Earth!

Trouble is the Democrats have no answers and all they do is shout to shout "impeach" or have Maxine Waters stand with Antifa to attack people who do not agree with them. This is unacceptable and Nancy Pelosi should wake up! Enough is enough!

I am getting tired of Democrats getting away with our money and their are no consequences for their misdoings - example the wife of Bill De Blasio - case of mission 850 million!

Hilery Clinton and the missing 6 Billion while she was in the State Department?
https://www.washingtontimes.com/news/2014/apr/4/state-dept-misplaced-6b-under-hillary-clinton-ig-r/

If I miss my taxes or don't payback money to Uncle Sam I go to jail. Why are DEMOCRATS above the law!

HEY MSM - In the real world (if you're interested?) Trump has made America less racist Anti-black and anti-Hispanic prejudice has declined since 2016