A SALUTE TO @CHUCKTODD AND @MEETTHEPRESS: Shot and Chaser

It begs the question: if they don’t answer to the President, who are they accountable to? 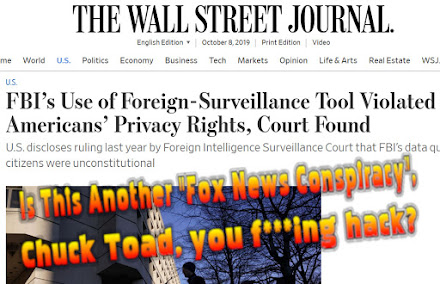 Some of the Federal Bureau of Investigation’s electronic surveillance activities violated the constitutional privacy rights of Americans swept up in a controversial foreign intelligence program, a secretive surveillance court has ruled.

The ruling deals a rare rebuke to U.S. spying activities that have generally withstood legal challenge or review.

The intelligence community disclosed Tuesday that the Foreign Intelligence Surveillance Court last year found that the FBI’s pursuit of data about Americans ensnared in a warrantless internet-surveillance program intended to target foreign suspects may have violated the law authorizing the program, as well as the Constitution’s Fourth Amendment protections against unreasonable searches.

The court concluded that the FBI had been improperly searching a database of raw intelligence for information on Americans—raising concerns about oversight of the program, which as a spy program operates in near total secrecy.

In other cases, the court ruling reveals improper use of the database by individuals. In one case, an FBI contractor ran a query of an intelligence database... [the FBI] failed to make a persuasive argument that modifying the program to better protect the privacy of Americans would hinder [its] ability to address national-security threats, wrote U.S. District Judge James Boasberg, who serves on the FISA Court, in the partially redacted 167-page opinion released Tuesday.

“The court accordingly finds that the FBI’s querying procedures and minimization procedures are not consistent with the requirements of the Fourth Amendment,” Mr. Boasberg concluded.

Hey, Chuck Todd! Is this a f***ing "Fox News conspiracy theory", you f***ing hack? You're a f***ing disgrace. Protip: Resign, shut your f***ing pie-hole, and go hide in a lobbying firm with the rest of your Democrat pals.

Sorry, folks. I don't usually get heated up, but when I saw Todd's performance shouting over Senator Ron Johnson when he tried to bring up spying on the Trump campaign, I about lost my cookies. This IG report on FISA abuse better be out soon, or there's gonna be a real march on Washington, and it won't necessarily be pretty.

The shot pops up then the line with it disappears, is there some censoring going on with firefox?

The only way for this abuse of power to end is to stop building these databases, and destroy what has been stored in all those vast warehouses out in Utah.

"Those who would give up essential Liberty, to purchase a little temporary Safety, deserve neither Liberty nor Safety."

PS: This quote was not originally intended to cover anything remotely resembling the current information gathering enabled by today's tech capabilities, but was more about money spent on safety at the, then, edge of civilation, the Fronteir.
It's relevance today, however, is uncanny.