The Democrats’ Bloodless Assassination Attempt Has Failed, At Least for Now

This most absurd and irresponsible of all assaults on the presidency in America’s rich history of low political chicanery is now down to a desperate gamble by the Democrats.

Democrats cannot possibly sustain the argument that they should have witnesses, whom they failed to call among the 17 they had in the House of Representatives (which they control) but the Republican Senate majority cannot call witnesses on behalf of the president.

Peggy Noonan, the most believable of the media Trump-bashers because she is such a generally fair-minded person, proposed on January 25 in the Wall Street Journal that the Democrats call John Bolton, who they know would be a hostile witness against the president, and Mick Mulvaney, who could continue to explain his unforgivable butchery of an answer to a reasonable press question about political influence on foreign aid. In return, Noonan offered generously, the Republicans could call Joe Biden—who would then complete his flameout as a candidate or make a brilliant defense and clinch the nomination—and Rudy Giuliani, so the Democrats could try the Lev Parnas case for their own delectation. (Parnas is an indicted former associate of Giuliani negotiating his plea bargain.)

This is fairness according to Peggy Noonan: a perfect bipartisan solution of four home-run witnesses for the Democrats and four prearranged strikeouts for the Republicans. 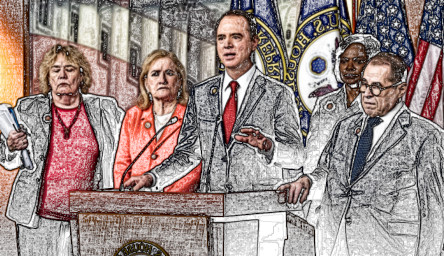 Not even such a fatuous scenario as this would alter the outcome: there is no probative evidence that the president did what he is accused of doing, and what he is accused of is not illegal, not impeachable, and the entire episode is an outrage and a disgrace. As anti-Trump law professor Jonathan Turley testified at the House Judiciary Committee in December, the abuse of power that has occurred has been the impeachment of the president, not any act by the president that has come to light.

The Democrats will not be the only side with witnesses and they cannot allow Representative Adam Schiff (D-Calif.), his senior staff, or the well-known pseudo-whistleblower to testify. If they do the entire sleazy, pre-cooked arrangement will blow up in their faces. But they need the argument that the Republicans blocked John Bolton so they can misrepresent this misbegotten turkey of an impeachment as a convincing case. The argument will be that if the Republicans had not imposed a “cover-up” by preventing Bolton from testifying, it all would have ended differently.

Again, the argument is nonsense. Bolton would not have anything but an opinion and perhaps a recollection of uncertain accuracy in all of the circumstances that Trump was leveraging assistance to Ukraine in exchange for an investigation of the Bidens. It would be a mixture of sour grapes from a fired former adviser and the pressure on all authors of books to sell them. His testimony would not swing the verdict in any event. Nor could the Democrats be sanguine about Hunter Biden’s testimony, as he would be eviscerated by the president’s counsel as a token potential conduit in an influence-peddling operation.

The accusations against President Trump have not got off the ground despite all the venomous and repetitive loquacity of the prosecution managers, Schiff (who chairs the House Intelligence Committee) and House Judiciary Committee Chairman Jerry Nadler (D-N.Y.). The jig is up: the Democrats have used the nuclear option, played the big Trump card, had their silly impeachment trial and now they are desperately looking for an exit strategy that leaves a political shirt on their backs. So they are clamoring for witnesses, as if they were fearless and had nothing to hide, and hope that the White House and majority leader Mitch McConnell (R-Ky.) persuade even their nominal co-partisans to stand fast and conclude that the case is so weak, it should end now.

This is all coming as Trump mounts the national and world stage as the supreme single-combat warrior.

Richard Nixon, in contrast, was so stressed by the adoption of articles of impeachment against him that the secretary of state, Henry Kissinger, sent a message to the defense department that no orders from the president committing forces to action should be followed unless countersigned by himself or White House Chief of Staff Alexander Haig (a completely unnecessary precaution). Similarly, President Bill Clinton at this point in his impeachment, was in full bunker mode. Yet President Trump has conspicuously increased the tempo of events.

As trial opened, Trump was speaking in Davos—and though he put it more subtly—his point was that he is the only world leader making active progress in narrowing the income disparity gap. Contrary to the oratory of Democrats since Alfred E. Smith in 1928, the lower end of the income range in the United States today, with full employment and sharply declining rates of illegal immigration, is finally gaining occupational income (capital gains are harder to measure), in larger percentage increments than the highest brackets.

As the trial proceeded, the president signed the U.S.-Mexico-Canada trade agreement (USMCA), which all observers, led by traditionally Democratic organized labor, seem to agree is a signal improvement on the preceding Clinton-Bush NAFTA arrangements.

And as the Senate trial approached its climax, Trump unveiled the most comprehensive and realistic proposal for resolution of the Palestinian problem that has yet been devised. The fact that the Palestinians attacked it before it was made public isn’t really relevant, as both major parties in Israel approve of it and the correlation of forces is such (and Hamas and the PLO so discredited) that this arrangement actually has a chance of enactment.

As febrile cable-news Trump-haters start to crack up—Lawrence O’Donnell seems to be having out-of-body experiences as he comments on the bumbling Democrats and Don Lemon burst into uncontrollable laughter over on-air denigrations of Trump-followers—Trump is killing terrorist leaders, signing renegotiated trade deals, and pitching economic growth and rising incomes for the less-skilled workers in a full-employment economy.

Meantime, very few of the questions as the Senate drones on are legally relevant and many, on both sides, are simply requests for more polemics from the House managers and the president’s counsel. No one is watching and it never comes up in the Democratic primaries.

Not the least of the ironies of the impeachment trial is that in almost the same measure that the president did nothing inappropriate, there is no evidence that Hunter Biden did either, and not much that his father did. If a notorious Ukrainian gas company thought it might gain from having close relatives of the vice president and secretary of state on its board, there is nothing wrong with them being well-paid to serve as directors, no matter how ignorant they were of the East European gas industry. And there is nothing wrong with them accepting $83,000-a-month from this source as long as they did not intervene corruptly to try to influence official U.S. policy in a self-serving way.

The former vice president will have to do a better job than he has of explaining why he had a Ukrainian prosecutor fired and thought it a matter to boast about, but he deserves the benefit of the doubt as everyone else does. What Biden cannot do any longer is inflict on the country his unctuous story that he will not comment on the Burisma affair because “It would take attention away from the illegal conduct of the president.” Not even Nadler and Schiff are seriously alleging an illegality against Trump, and Joe Biden is not an acceptable source for such pieties.

When Nadler tells the United States Senate, presided over by the chief justice of the United States, that Alan Dershowitz is the only legal scholar in American history to claim that presidential misconduct that justified removal from office must be illegal, and Dershowitz instantly and reconditely refutes him before the same exalted audience, it is time to ring down the curtain and let the Democrats try to sell the canard that there has been a cover-up.

Nor should the end be delayed by Senate Minority Leader Chuck Schumer (D-N.Y.) behaving, as Senator John Kennedy (R-Louisiana) put it, “like a 6-year-old boy playing Batman and running from camera to camera.”

The Democrats will have to give up their pretense of playing moral custodians of the national virtue against a monster who has usurped and abused power. They will have to try to find a presentable nominee from the puny harvest of their declared candidates to run against the incumbent fair and square. Their prolonged attempt at bloodless assassination has failed.

Minor point. There were 18 that testified in the House, not 17. Why is this witness MIA? The Senate could have adopted the House rules and only allowed the witness' they wanted telling the dems you had your witness', now hear ours. They did not. Deep State could not have that. Too much sunlight is bad for cockroaches. All theater for the dis educated. Nothing more.

The Democrats have politicized every aspect of the Constitution and only a major repudiation at the ballot box can change their course of action.