Remember when @TulsiGabbard DESTROYED @KamalaHarris in the #DemDebates? I bet the voting public does. pic.twitter.com/6hAttLxavr

No Linx For You!

Since we've been posting the Linx pretty much every day since January 9, 2009, it figured we owed my 12 regular readers an update for today's "missing linx". 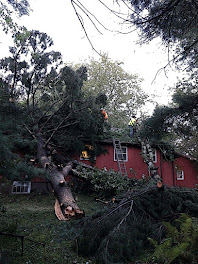 On Saturday, the extended posse and I traveled to Grand Beach, Michigan to a nice little rental home just a couple of blocks from Lake Michigan. It was our first post-Wuhan getaway, and represented a quick change in venue as our South Carolina plans were nuked when the Isle of Palms went into lockdown.

We hadn't been to Grand Beach before, which sits near the border of Indiana and Michigan. It's a lovely, heavily wooded area, with limited public beaches --- due to high water, erosion, or some combination thereof. But several of the beaches were open.

Sunday and Monday were great beach days. The water was cool and invigorating --- but not frigid, like the 57-degree August water temperatures you'd experience on Cape Cod.

Late Monday afternoon, a weather alert hit one of our phones. A storm called a "derecho", a term I'd never heard before, was headed into Chicago with 100 MPH winds. And it wasn't stopping there. It was headed east, directly onto Grand Beach.

Curiously, the fast-moving storm ripped through the area quickly, but without obvious heavy damage. The Internet and power were both on 30 minutes after the red and orange bands had rolled through.

Then the power suddenly went down. And stayed down.

Larwyn’s Linx: Victor Davis Hanson - Who or What Exactly Is Running Against Trump?

To leftists like Lori Lightfoot they are not people they are automatons: John Ruberry
How Bad is Bill De Blasio?: RS
Teacher worries parents will overhear what he’s actually teaching their kids online: BPR

Biden Promises To Outlaw Gas-Powered Cars If Elected President: I&I
Pelosi spars with Chris Wallace on stalled congressional coronavirus relief: Anthony Leonardi
Trump Stands Between You and the Poverty the Democrats Have Ready for You: Robert Spencer

Lindsay Graham Releases FBI Talking Points for SSCI Briefing 2/14/18; Graham Positioned to Defend SSCI: CTH
Barr: "The American People Are Being Told A Lie By The Media" About Portland: Ian Schwartz
Evidence Is Mounting That Governor Cuomo Is Targeting Bars That Criticize Him for Suspension: Matt Margolis

@SenBlumenthal’s twisting of classified briefings and his false news reports are beyond the pale: Sen. Ron Johnson
Flynn case: oral argument for the rehearing by the full DC Circuit is Tuesday: Leslie McAdoo Gordon
Susan Rice on her Sunday show appearances after Benghazi attack — She was "a team player": Althouse

Did The FBI Mislead The Senate On The Steele Dossier? The Media Is Not Interested: Jonathan Turley
The Mainstream Media Has Betrayed Its Constitutional Privilege: Stephen Kruiser
Mark Levin likens teachers' unions that want COVID-19 protections for schools to segregationists: SorosMatters

Status Update: Meet At The Old Mill, We Ride at Midnight: CTH
WWE does Antifa: Paul Mirengoff
The Year May Be A Shambles But Dinner Shall Triumph: MOTUS

The President got as much help as he could to our People.
The Democrats are trying to bankrupt us so Trump is blamed.
The Democrat leaders are willing to hurt America to defeat Trump.

They need to be taught a lesson.
Vote for Trump, not the Puppet.

at 8:46 AM 1 comments
Email ThisBlogThis!Share to TwitterShare to FacebookShare to Pinterest
Labels: Linkfest

Good to see Nancy finally get something right! https://t.co/t12ZRozEBQ

Larwyn’s Linx: Everything They Can Do, He Has Done Better!

The Truth Doesn’t Care About Your Feelings – The Big Ugly: CTH
Why Do Our Intelligence Agencies Keep Lying to Us?: Roger L. Simon
Half a million incorrect absentee ballot applications sent across Virginia, including to dead people: JTN

Inoculating America and the World Against China’s ‘Virulent Strain of Communism’: SinoInsider
More questions than answers in ashes of Beirut: AT
Revealed: EU pays Muslim Brotherhood $43,320,000 to ‘Subjugate Europe’: JihadWatch

Lady M Haz a Sad: A Return of the But(t): MOTUS
“Keep punching each other in the face, just don’t shoot anybody.”: SDA
Everybody Knows: CTH

Pelosi has now admitted what we all knew: Communist China wants Biden for president. https://t.co/PJNj4X1TFJ

Whiplash: After ‘Trump Wants to Kill Children’, Dems Suddenly Want Schools to Open: RS
Kick the ‘1619 Project’ Out of Schools: David Randall
Memo May Have Finally Gone Out to Start Throwing Antifa Under the Bus: RS

Rumor: Biden Has Chosen His VP, As Susan Rice Offloads Netflix Stock: Hot Air
For Biden Family, a History of Tax Problems: Alana Goodman
“Biden” Retreats: What I Meant To Say Is Blacks Are Incredibly Diverse, Too: Ed Morrissey

Iran: China's Newest Colony?: Majid Rafizadeh
How the pandemic and Trump's art of unpredictability have changed China's calculations: Nirmal Ghosh
What Is Ammonium Nitrate And Why Did It Devastate Beirut?: David Hambling

President @realDonaldTrump: Left-wing violent extremism poses an increasing threat to our country. It's an ideology we have to stop. pic.twitter.com/8g1dMNc1JD

at 9:36 AM 0 comments
Email ThisBlogThis!Share to TwitterShare to FacebookShare to Pinterest
Labels: Linkfest

The top U.S. counterintelligence official said in a statement that China prefers President Trump lose the election, because Beijing considers him "unpredictable," while Russia is working to undermine Joe Biden. https://t.co/G359iTjCLI

Entitled Public School Teachers Demand That They Continue To Be Paid for Not Coming to Work: Ace
Trucking Company Owner: Cities That Defund Police Are in for a Big Surprise: WJ
Trouble at Calpers: Abrupt Exit Hits $400 Billion State Fund: Bloomgerb

How the Media Led the Great Racial Awakening: Zach Goldberg
NBC to Begin Laying Off Employees; Promise to Keep Layoffs to Less Than 3500: Ace
Trump 2020 is ahead of Trump 2016: Don Surber

Before and after photos from Beirut's port reveal scale of disaster: EuroNews
Israel's Last Resort: What Could Make The Middle East Into A Sea Of Nuclear Fire?: Robert Farley
Trump announces plan to delist Chinese companies that won't comply with U.S. stock exchange rules: JTN

From James Woods: Feral Irishman
It Must Be Libturd Thursday: Woodsterman
It looks as if this Fall's hit show will be called ‘Obamagate’: Andrea Widburg

Obama midwifed ISIS into existence netting at least half a million slaughtered
&
He sent Iran a planeload of $$$ they have used for terrorism https://t.co/ce2PtcMvGr

at 7:29 AM 2 comments
Email ThisBlogThis!Share to TwitterShare to FacebookShare to Pinterest
Labels: Linkfest

The Democrats have nominated someone who has lost it. Everyone can see it. Watch this. https://t.co/z41jd2FsZa

Larwyn’s Linx: Exclusive from Gen. Flynn: This Is My Letter to America

That Creepy Old Weirdo In The Basement Will Never Debate Trump: Kurt Schlichter
Biden cans plans to accept 2020 Democratic presidential nomination in Milwaukee: Naomi Lim
No Doubt About It: Democrats Are Part Of The Riot Problem: I&I

Hezbollah Hoarded Fertilizer That Blew Up Beirut, Planned to Use it Against Israel in 'Nuclear' Style Attack: Katie Pavlich
Beirut Blast: How Many Kilotons?: BattleSwarm
Our Annual August Debate Over the Bombs: Victor Davis Hanson

A thread summarizing what we know about COVID-19: Bachman
Philippines had the harshest lockdown and most mask wearing. It didn’t work.: Daniel Horowitz
Wind Power failure: on average every 3 days, there is a 500MW fail: JoNova

NYU’s Grossman school of Medicine study found patients given hydroxychloroquine and azithromycin at an early stage had a lower need for hospitalization than those who were not https://t.co/Rz0VPD5TuQ

Forgive me for asking this question, but who failed the American people?

After 6 months without lockdown, Sweden's COVID-19 deaths, infections bottom out: Daniel Payne
How Much Do You Know About COVID-19? Take This Quiz: Doug Badger
Why Progressive Activists Want to Silence the Truth About Climate Change: Virginia Allen

Insights to Consider Before November: Anonymous
An Ode To A Unique Kind of Madness: MOTUS
Joe’s Debate Notes: Earl of Taint

"The answer to why we haven't seen it is simple, because Keith Ellison, he's the Attorney General in Minnesota, hid the video from the public. He refused to release the footage." pic.twitter.com/oIaorihYUu

Sounds like Durham is done! Trump has seen the goods!

The harms children suffer when they are kept out of school due to Covid-19: OMB
Barack Obama omits AOC’s name while endorsing New York Democrats: Steven Nelson
Liberals, Secession, and “The Other”: Larry Schweikart

Factual Stuff That Will Help Reconcile Issues Within Spygate and The Special Counsel: CTH
Big Tech Censorship is the IRS Scandal of 2020: Joel B. Pollak
If They can Kill Your Parents.......: Counterspin

Media Silent As Christopher Steele ‘Hero’ ‘Spymaster’ Narrative Crumbles: Mollie Hemingway
Hugh Hewitt in WaPo: The Case For Trump Will Come Down To His Record: It’s A Strong One.: Instapundit
Why the Media Chose Not to Hear When Trump Called Obama a Literary Fraud: Jack Cashill

So they’re openly expressing their fear that Biden will be exposed as a drooling shell of a man, with one foot deep into senescence? https://t.co/Gsf8hFyWaL


at 7:14 AM 1 comments
Email ThisBlogThis!Share to TwitterShare to FacebookShare to Pinterest
Labels: Linkfest

The obvious journalistic question to anyone claiming Trump won't accept election results is to ask if the person making the claim will accept the 2020 election results if Trump wins. If they're part of the Resistance, they should be asked why they haven't accepted 2016 results.

Let's Take The Drooling, Groping Retard Seriously: What Is His Economic Plan For America, And Will It Work?: Ace
Traffic Court Notices In Chicago Have Been A Mess, The Court Clerk Says It’s Racist To Ask Why: John Sexton
UPenn Can’t Explain Mystery Donation From Chinese Company: Alana Goodman

Rich Lowry outs himself as a fraud: Don Surber
Ratings Crash for NBA and MLB After Their Desecration of the American Flag: Warner Todd Huston
Potential Dem VP pick Karen Bass has had a change of heart regarding Fidel Castro: Twitchy

“Morning Consult” names the Postal Service the most trusted brand in America: Hmmm
Was Karen Bass To Be Biden’s VP Pick — Until The Daily Caller’s Revelations About Her and Scientology?: RS
Sunday Talks: Jason Miller -vs- Insufferable Chris Wallace: CTH

at 7:14 AM 0 comments
Email ThisBlogThis!Share to TwitterShare to FacebookShare to Pinterest
Labels: Linkfest

We are STILL waiting for results.

It is totally unacceptable, and why we cannot afford a rushed transition to mass mail-in voting.

The case for Trump will come down to his record. It’s a strong one.: Hugh Hewitt
Science Shows Not Going To School Hurts Kids Much Worse Than COVID: Gov. Kristi Noem
Will Joe Biden Put Castro-Loving Communist Karen Bass A Heartbeat Away from Presidency?: Matt Wolking

Thousands protest in Berlin against coronavirus restrictions: Geir Moulson
Russia may be withholding missile deliveries to China: Frank Chen
How the Mossad hunted the ‘Butcher of Riga,’ who murdered up to 30,000 Jews: TOI

Biden Campaign Says He Is So Close To A VP Pick He Can Smell Her: Babylon Bee
Look At Those Little Monkeys Run**: MOTUS
Joe’s Fires First Pitch To Open Season: Earl of Taint