I'd be hard-pressed to pick an exact date, but suffice it to say that shortly after the inauguration of Barack Obama, vintage media committed suicide.

Thanks to Tom Blumer, who spotted the seminal admission in The New York Times, we have confirmation that journalism is as dead as Francisco Franco.

Put simply, the administration refuses to allow old media to report on any White House discussions without quote approval. And these former journalists go along to get along, compromising their principles and ethics to stay in good graces with this ludicrous regime. 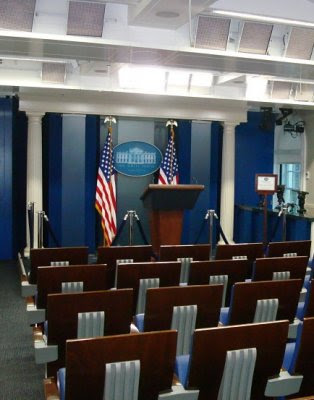 • "[T]he (Obama campaign’s) press office has veto power over what statements can be quoted and attributed by name.”

• “Quote approval is standard practice for the Obama campaign, used by many top strategists and almost all midlevel aides in Chicago and at the White House.”

• “From Capitol Hill to the Treasury Department, interviews granted only with quote approval have become the default position.”

• “It was difficult to find a news outlet that had not agreed to quote approval, albeit reluctantly.” Ratner believes that the Associated Press and McClatchy are exceptions; I’m less than convinced.

• “Many journalists spoke about the editing only if granted anonymity, an irony that did not escape them.”

Blumer predicts, however, that vintage media could make a comeback someday.

If the Times, with what remaining power and influence it has, began to document and report every instance where a sycophantic administration flunky demanded quote approval and it firmly refused, I’ll bet things would change — and quickly. But either [they don't] have the stones to try, or for the time being would prefer not to.

Perhaps the day [those] in this sadly compromised calling will find the nerve to be journalists again will arrive on about January 21, 2013 — but only if someone other than Barack Obama begins to occupy the White House.

It's worth repeating early and often. This administration is as lawless as any in U.S. history. From shipping assault weapons to Mexican drug cartels; to declaring the Senate in recess when it clearly was not; to bribing Senators to pass Obamacare; to failing to prosecute a single Wall Street executive related to the financial crash, co-mingling of client funds or outright fraud; to publishing "enemies lists" of those who dare to contribute to their opponents' campaigns; to actively promoting vote fraud; to ordering the "DREAM Act" by executive fiat, when it couldn't pass Congress; to disabling credit-card security in order to accept illegal campaign contributions; and the list goes on and on and on.

There's not much in the Constitution this administration likes, and the First Amendment -- whether through its attack on the Catholic Church or its virulent hatred of free speech -- is a primary target.

The penalty for a MSM person telling the truth about Obama is more severe then it is for lying to the public.

Did you miss the part about it being common practice and that Romney does it too? With all the out of context quoting going on and so many people not understanding the importance of context, you can hardly blame them.