The Progressive and the Pencil

This is a pencil. There isn't a single person in the world who could make this pencil.

The wood from which it was made came from a tree cut down in the state of Washington.

To cut down that tree, it took a saw.

To make that saw, it took steel.

To make that steel, it took iron ore.

The black center of the pencil, which we call 'lead', is actually made from compressed graphite.

It comes from mines in South America.

The eraser, made from rubber, likely comes from Malaysia.

The rubber tree wasn't native to Malaysia. It was imported from South America by businessmen with the help of the British government.

The brass fairing that holds the eraser probably came from the Midwestern United States, where computerized machine tools stamp, roll, finish and convey them.

The yellow paint, the glue that holds it together... literally thousands of people cooperated to make this pencil.

People who don't speak the same language. Who practice different religions. Who might hate one another if they ever met. When you visit a store and buy this pencil, you are -- in effect -- trading a few minutes of your time for a few seconds of time from all those thousands of people.

What brought them together and induced them to cooperate to make this pencil?

There was no "Pencil Czar" sending out orders from Washington. It was the magic of the free market. The impersonal operation of a market system that brought them together and got them to cooperate to make this pencil, so that you could have it for a few pennies.

That is why the free market system is so important to our society. It fosters harmony, cooperation and peaceful interactions between the peoples of the world.

How many of the Democrats' despised "millionaires and billionaires" were created as this pencil came into existence? Do the employees of the steel mill care? The saw manufacturer? The buyer of the pencil? Of course not.

In the formulation of the hard left Democrat party, the manufacture and distribution of pencils would be administered by a "Czar" and a centralized, federal agency. A few masterminds, like Obamacare's health advisory board, would try to manage and control thousands of voluntary, individual interactions. And we know from history that it simply can't be done. 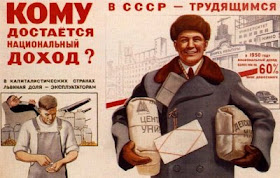 We must call Obama and the Democrats' incessant drive for centralized government -- and their class-warfare rhetoric -- what it is: a new branding of the old Marxist philosophies, i.e., "Progressivism". It's just a different name for the same failed ideology that spreads misery and poverty where ever it is implemented.

The modern Democrat Party should be called what it is: the party of Marx. The Party of Unconstitutionality. The Party of Economic Misery and Failure. And it must be stopped -- quickly -- if this Republic is to survive.


Based upon: Milton Friedman's 'Power of the Market'. Hat tip: Mark Levin.